The Babywatcher creates a joyful experience by visualising your unborn child at home.

When Raymond Bergs’ wife got pregnant, Raymond’s inquisitive mind led him to develop the Babywatcher. During the pregnancy he found it fascinating to see the Echo of his unborn child during checkups at the clinic.

Hence, would it not be fantastic if they could see their baby-to-be at home, when they felt like it? After three years of research and seed investment, he came up with a compact echo-scanner specifically for the consumer market. The kit is simple to use and lets pregnant women make scans safely, store the pictures and share them with family and friends.

In February 2017, the Babywatcher won the Dutch Baby Innovation Award 2017 as most innovative baby product in 'baby care'. We heard many times the great feeling customers get by making their own-self-made ultrasound.

Recent quotes from our customers: “seeing what I feel during my pregnancy makes me really happy", "what a fantastic invention. Very easy to use", "in just a few steps I have a clear 2D video that I can share with my family and even my friends abroad!” We envision many uses for the Babywatcher for pregnant consumers as well as for B2C. We at BabyWatcher believe that the Babywatcher is the future and that it has the potential to have an impact on unique entertainment during pregnancy. We currently have two retail partnerships in place. May 2016:
Launch of Babywatcher in the Benelux. International and national press and media reported extensively over BabyWatcher's market introduction.

October 2016:
BabyWatcher has been ranked as number one undiscovered Dutch Start-Ups out of a total of 3,000 start-ups.

January 2017:
BabyWatcher was chosen as one of 30 startups selected to participate in the CES (Consumer Electronic Show) at Las Vegas USA. 68 interested companies from US, Canada, UK, UAE, China and Middle East have been in contact with BabyWatcher for launching the product in their country.

February 2017:
BabyWatcher presents the device at the Baby Trade Show in Amsterdam.

March 2017:
More than 10.000 ultrasounds have been successfully made using BabyWatcher. From our own research, we found that the majority of the users recognise the 2D Images and videos, and we have had no reports of the usage leading to requesting additional medical consults. Our Facebook followers rank Babywatcher at 4.5 out of 5. 96% of users would recommend the Babywatcher. The earnings model is based on the online rental of scanners via the website www.mybabywatcher.com. Traffic from the target group is generated online and offline through partners such as specialist baby shops, maternity care organisations, and baby care retail outlets.

Renting for one week costs € 79, two weeks is € 99 and 3 weeks is € 119. In comparison, it costs approximately € 90 to make one fun ultrasound. In addition to directly hiring the Babywatcher, family and friends can buy gift vouchers via BabyWatcher's web shop and via third-party web shops and, in the future, via bricks and mortar shops. Finally, a Windows tablet can also be hired as an extra service. The raised money will be invested in extending the sales-channels in the Benelux and building the international network in Europe. To achieve these goals we will:
- invest in online and offline marketing campaigns.
- invest in man-power to activate the list of 50 leads (Benelux) and international leads.
- invest in current IT-portal including management reporting.
- invest in Apple Based platform to adapt the Babywatcher.

Please note that the company has two outstanding loans totalling EUR 147,000. None of the proceeds of this round will be used to repay these loans. Annually, there are over 5 million pregnancies in Europe. In the Benelux this amounts to approximately 290,000 per year.

The target market is:
direct -> pregnant between week 14 and week 34.
indirect -> international retailers in baby-care (one contract with AS Watson). Current size amounts 290,000 pregnancies in the Benelux. We are also planning for BabyWatcher to launch in Germany as well as the UK. Both countries each have on average 670,000 pregnancies yearly.

We have one central inhouse handling centre in Heerlen, Netherlands. The handling process is well managed via our own designed and implemented IT-portal. 2x a day the carrier DHL Parcel Services is picking up the parcels and returning the inbound parcels. Each Babywatcher is tested and cleaned before delivering to a customer. BabyWatcher is one of the first companies providing a home baby-ultrasound scanner at a price level of € 3,30 per ultrasound. To our knowledge, based on this price, no competition exists.

Other unique buying points for a customer:
- make ultrasounds at home.
- easy to use.
- Anywhere and whenever you want.
- unlimited pictures and videos to be store and shared from local computer.

BabyWatcher has signed a contract with a retailer with international marketing and sales channels. The retailers are not allowed to do business with potential competitors for at least 1 year after starting the cooperation. 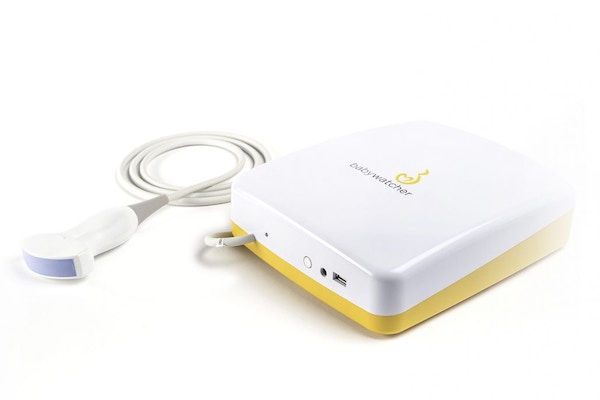