Worth Capital presents The Big App Fund powered by Facebook. 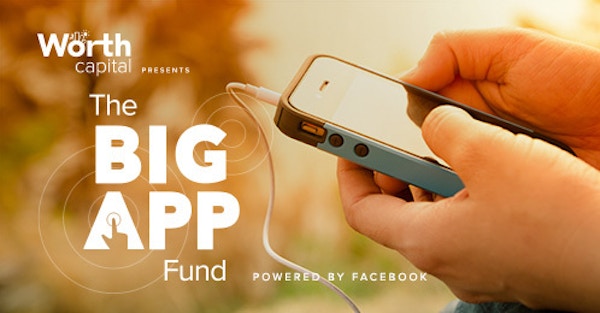 After the success of our Foundation Fund earlier this year, Worth is launching a new App fund in partnership with Facebook. Our new fund will invest in three businesses which come top in a pan-European business competition, The Big App 2014. The £350k fund will be called The Big App Fund I.

The competition aims to discover Europe's best App Entrepreneurs. Facebook is supporting the competition with a major, pan-European advertising campaign for six weeks, in tandem with a big PR push to national and international media.

It is anticipated that significant numbers of app businesses and developers will enter, and the best 50 will go to the Big App Pitch Day at Facebook HQ on 27th October 2014. From there we will choose the best 10, who will enter a final judging event in London on 17th November 2014. To help us, we have assembled a stellar judging panel from the App and investment world, which so far includes:

The result of the judging will be one winner and two runners up. The winner will receive £150k and the runners-up £100k each, for stakes to be determined at the time of the investment. Each winning business will also receive a significant package of support from Facebook and Worth. In the event that we overfund, we will either choose one or two more runners-up or increase the funding in the original three businesses.

This is a ground breaking moment for us as Facebook's support takes this to the next level and presents you as investors with an unprecedented opportunity to invest in the very best app businesses in Europe.

We strongly believe that our first Big App Fund will have a significant chance of success for the following reasons:

Worth Capital was founded by the team who set up the Consumer Engagement Group, a £20m turnover marketing services group established in 1994. The Big App 2014 is the second major business competition run by Worth. Our major business competitions, which are linked with crowd-funded funds are the most effective way of unearthing the best businesses of tomorrow. We also provide the winners with ongoing advice and mentoring support to help them to grow much faster.

What have we achieved so far?

The partnership with Facebook is confirmed and will give us unrivalled exposure to the app ecosystem.

We have jointly agreed detailed online and offline media plans to enable us to reach app developers and businesses across the whole of Europe and Israel.

The Mobile App market is exploding:

The Fund will invest in the three winning businesses chosen by the judging panel.

With a £350k raise, we plan to invest the proceeds as follows:

Please note that the actual equity stake received may differ depending on the type and maturity of the relevant business.

Worth Capital will take an option of 7% in each invested business. Each business the Fund invests in will receive on-going mentoring from a Worth Mentor, with the focus tailored to their specific needs to reach a valuable exit.

We cannot guarantee that the winning businesses will be EIS or SEIS eligible (on the basis that this is a pan-European competition) and therefore this campaign has not been labelled as such. However, in the event that any of the winning businesses are EIS or SEIS eligible then any investor in this campaign will receive the benefits of such tax relief provided that they are themselves eligible to claim the relief in the usual way.

The fund will be investing in more than one company, and as a result the minimum investment in this fund is £100, and multiples thereof. The Worth team will inform the Fund's manager, Seedrs Limited ("Seedrs") as to who the winning businesses are. Seedrs will be holding the funds in escrow until the team provides the relevant investment recommendation, and Seedrs will act on such recommendation subject to their strict legal due diligence process. Seedrs will make the investment into the relevant business, and will hold and manage such investment as nominee for the investors in the funds. Seedrs is an FCA-authorised firm that manages a wide range of investments in early-stage businesses.

The campaign organiser (who may run an accelerator, for example) identifies the businesses and often provides them with advice, support and mentorship.

The key to successful equity investing is diversification, and a cohort campaign allows you to easily diversify with the added benefit of the businesses receiving additional support and help. For example, if you invest £1,000 into a cohort campaign, each business will receive a portion of the cash invested and you will receive shares in those companies.