Bundle is a mobile app for local news readers. At the core of the app is a location-driven news feed which discovers news articles for users based on their current location.

The decline of many traditional news organisations has led to local news becoming more and more fragmented which in turn has made local news difficult for people to discover.

Bundle intends to solve this fragmentation for news readers by aggregating local news from a variety of sources into one easily accessible news feed - by doing this with a mobile app we aim to provide users with a real-time, location-driven experience. Bundle doesn't just create a singular news feed experience, users could also save locations, akin to a weather app, making it easy to discover and consume news from places that matter to them. 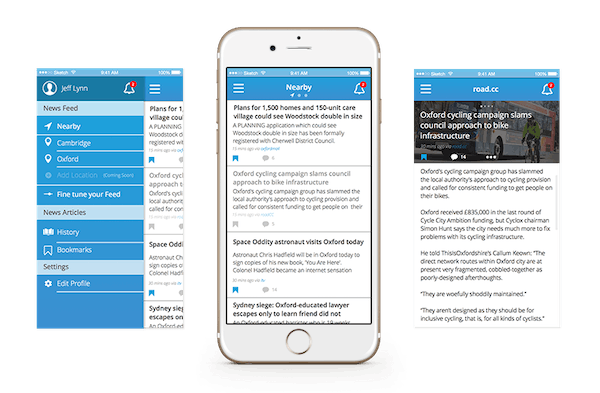 When users launch the app and grant permission Bundle will know their location and with this understanding source the latest news articles that are geographically relevant to them in real-time.

This means people will no longer have to search or switch between the variety of websites that cover local news stories, but can instead, engage with a personalised news feed based on their current or saved location.

Users could make selections to receive a more personalised news feed and over time Bundle would passively learn what users like to read extending the relevancy even further; so not only will provide the answers for “what is happening nearby” it seeks to find “what matters to me nearby”.

We believe that Bundle will be the go to service for local news, so when people think of news nearby, they will think of Bundle.

We have brought together a super team who have bootstrapped the business to date.

Despite the obvious limitations of bootstrapping we have gone deep in to the design and user experience of the app. Anna Youngs has worked closely with Kelvin to achieve a high level of design which has now been handed over to Bernardo Santana, an iOS developer who has just joined the team.

We have also achieved a number of technical feats including:

* a back-end service to manage users, ready to scale
* designed and implemented the underlying databases for news aggregation for the cities that Bundle will launch in
* developed a news discovery algorithm to find significance in articles beyond x and y coordinates

Future hires have been identified to provide us with the opportunity to accelerate development and target an app store launch in September of this year.

Bundle plans to become the go-to mobile app and platform for local news, and in doing so will be perfectly placed to capitalise on the increasing flow of advertising spend allocated to mobile.

Revenue would be generated through advertising placements within Bundle’s news feed - an environment that is designed to be conducive for native mobile ads.

The segment of mobile advertising that Bundle is positioned for is classified as native-social (visual and textual brand messaging merged into organic feed-based interfaces of mobile social apps) by BIA-Kelsey who predict that this segment will grow from $3.3 billion in 2014 to $9.9 billion in 2018, in the US alone. A recent IAB / PwC study accounted for over a £1 billion spent in 2014 across both mobile ads on social media and content / native ads in the UK.

Bundle is designed to easily integrate with Facebook’s mobile advertising offering (or any other third-party mobile advertising platform) to yield advertising revenue quickly. However, it is our ambition to develop proprietary ad formats that are aligned to our purpose - those which feel native to the news consumption experience on Bundle.

By retaining control of our advertising formats Bundle could be crafted into an excellent local news discovery experience for users and at the same time become a compelling environment for advertisers to reach our users. 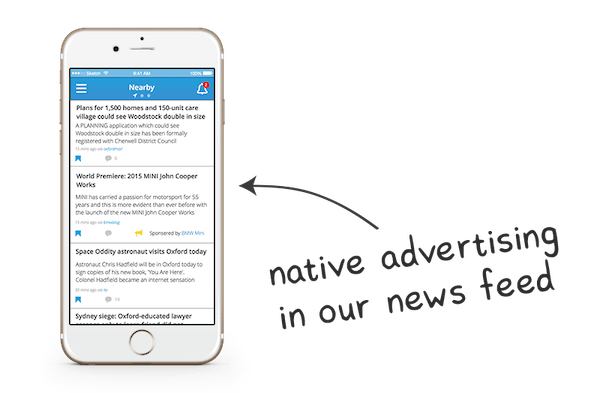 The investment would facilitate the growth of our team, enabling us to release Bundle to the app store in September of this year. To reach this milestone we plan to add software engineers to our team; Bernardo Santana has just started with us and right now is focused on the iOS app development. Beyond this we have engineers lined up to further develop our news discovery processes and algorithms, this work would ensure the quality and relevance of the news that Bundle would deliver to users news feeds.

With news readers, news publishers and advertisers we target a multi-sided market and long term success would come from creating value for all concerned but first and foremost that value needs to be evident for our news readers.

In terms of news readers we estimate there are around 8 million people in the UK who have a requirement for a local news aggregation service.

We believe that evidence on a local level supports the existence of these news consumers with local publishers such as Cambridge News and Daily Echo (Southampton) having 11,500 and 28,000 Facebook followers respectively.

These people are conditioned to the slick mobile app experiences of Facebook and Twitter, and whilst these are proxies for news, neither are location-driven news feeds operating solely for local news discovery.

What we have seen is that its not possible for Facebook and Twitter to serve broad social media habits whilst meeting the potential needs of local news consumers. Mobile apps have succeeded by serving specific needs; for example Instagram for image sharing, and Whatsapp for messaging. Bundle could succeed in the same fashion, by doing one thing - local news - really well.

With a critical mass of users, Bundle becomes a valuable proposition for advertisers who will want to target our users in a local context, and over the next few years we expect more and more advertisers to shift their ad spend to native ad placements on mobile - placements which are conducive to Bundle’s News Feed

Today we find mobile’s share of ad spend significantly lagging behind time spent on the devices but by 2018, mobile will account for 70.4% of all digital ad spending in the UK.

This growth is not only fueled by the increasing amount of time people now spend on mobiles but also the downfall of the banner ad. Banner ad performance has declined rapidly with digital advertisers losing performance causing digital publishers to lose revenue. Native advertising has emerged to address this problem with a more relevant experience for the user.

Bundle plans to initially launch to a limited market, the cities of Cambridge and Oxford. This local focus is an important part of our strategy as our service needs to acquire a concentration of users to gain from network effects that user interactions (for example commenting on articles) would create on the platform.

When Bundle is available in the app store we plan to get in front of as many prospective users as we can with activity that doesn’t necessarily scale but could be a catalyst for word-of-mouth. This would involve hitting the streets of Cambridge and Oxford; both cities offer many interesting physical spaces that can be utilised for experiential marketing, such as the Universities, High Streets and Parks.

This strategy could help us achieve the following:
* Create a memorable experience for our first users so that they have a greater investment in Bundle
* Earn app installs through word-of-mouth
* Establish credibility in our launch cities
* Form relationships with local organisations and media commentators for wider and longer lasting PR coverage 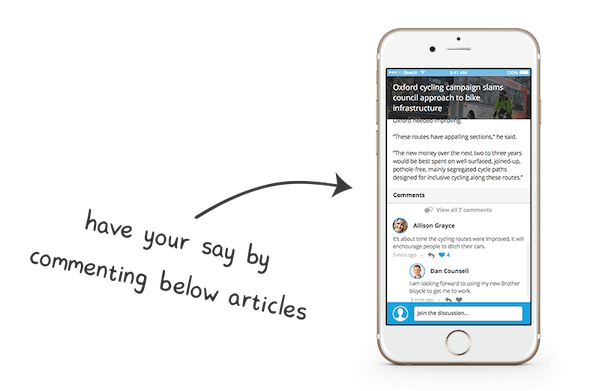 Bundle’s technology is designed to go deeper to find local news articles from wherever they come from, this is before our news discovery algorithms marry the context of articles sourced with a user’s location.

This technical focus on location has the potential to make Bundle stand out from incumbents. An example of this being the BBC News App, which despite having a significant revamp in January of this year, is still not a true location-driven experience, i.e, your news feed remains the same regardless of your current location.

As far as we know there is currently no location-driven mobile app service in the UK to access local news.

The competitive landscape is broadly made up of mobile apps that can be categorised as news aggregation or social content discovery.

We found that local news isn’t being addressed by either category. This is because the news aggregating services don’t provide for location-driven experiences and social content discovery services deal with user generated content rather than news articles.

A focus entirely on mobile is needed to solve the problem from discovery through to consumption and this is why Bundle could become a major platform for local news. 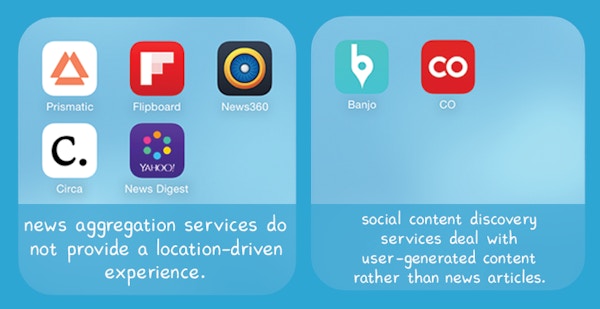 To access the Bundle team biographies, including current ownership