We're building products that we believe are far more intelligent than other wireless switches available, however as you can see in the photo below, our products still look and work in the exact same way an ordinary switch would - our products provide various benefits including energy saving, convenience, security and safety - see examples of use cases below (intended impact). 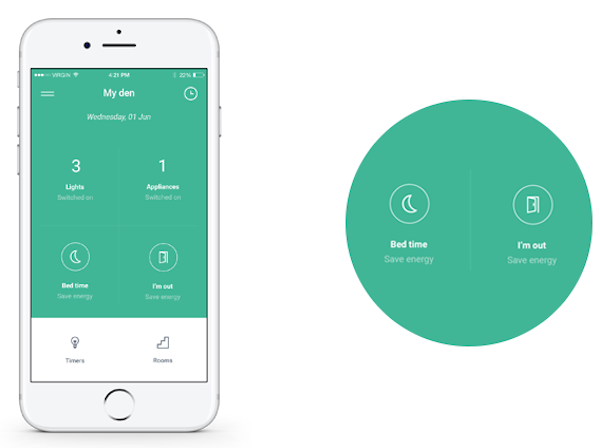 - Receive a notification next time you forget to turn your iron or hair straighteners off.
- Receive a notification if a loved one hasn’t been active for a worrying amount of time.
- Next time your child stumbles out of bed in the middle of the night on their way to the toilet, Den’s occupancy sensor will automatically activate your lights to keep them safe.
- Next time your smart smoke alarm detects smoke in the middle of the night, our light switches will automatically turn themselves on to guide you out of your home in safety.
- Elderly/disabled can control their light switches and plug sockets remotely, reducing the amount of movement required.

Security
- Your lights can automatically flick themselves on and off when you're away, giving off the impression your home is occupied to help prevent burglaries.
- If we detect activity or motion in the house while you're on holiday, we can send you a notification to let you know - We recently hired Bob Watkins as Managing Director. Bob was previously CEO at Amstrad where he worked alongside Alan Sugar for 25 years - he adds a huge amount of value to Den having already successfully developed and shipped millions of products around the world

- We have received international publicity from the likes of Financial Times, Bloomberg TV, Sky News, BBC Radio, TechCrunch, The Guardian, The Times, Mirror, and lots more

- We've developed a fully functional range of prototypes for our initial product offering that are now nearly ready for manufacturing - we plan to begin the manufacturing process in April, with the aim of shipping products to customers in September 2017

- We currently have a patent pending in 10 countries for our switching mechanism, and have the patent granted in Saudi Arabia

- To date we've raised £1.1m in funding via Seedrs, making Den the most overfunded campaign to exist on Seedrs and making our founder Yasser Khattak the youngest to raise funds on the platform

- We were nominated for Product Of The Year by London Innovator Awards, making it into the top 5

- We've built a solid investor/advisor network, including Mark Davies who was on the founding team at Betfair, and Julian Nebreda who is the CEO of the AES Corporation Brazil.

1) Hardware: As a manufacturing business we would generate revenues by selling our hardware (physical products).

2) Subscriptions: although our iOS and Android app will initially be free, we are currently exploring the opportunities to receive a reoccurring revenue via a £1 monthly app subscription for particular features,. 2) Existing demand for connected/automated systems.
- This is already a proven market, which is growing rapidly - The global market is predicted to generate around $61b in revenue this year, which is expected to grow to around $460b by 2019, meaning there's a huge opportunity. 30% of people plan to buy a connect device.

They've been around for over 10 years and have never caught on. However, many of the current wireless switches available on the market have replaced the familiar rocker switch with complicated touch pads and buttons - we believe this makes them complicated, unfamiliar, and not mass market.

To access the Den team biographies, including current ownership