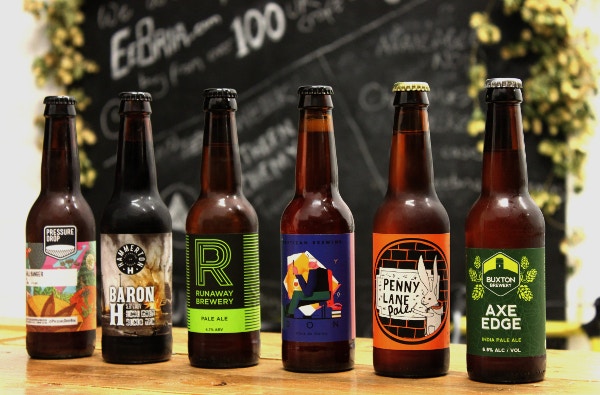 EeBriaTrade takes a revolutionary marketplace approach to the huge B2B beer distribution industry (worth £16.9bn in the UK, £141bn in Europe and £66bn in the US).

Our model enables breweries to sell directly to pubs, cutting out national and regional distributors entirely, with even large breweries seeing us as a valuable new approach to an industry in need of change. In the five months that EeBriaTrade has been live, we’ve become a major cause for concern for incumbent distributors and we’re looking for investment to rapidly grow this opportunity and to cement our position in the industry.

EeBriaTrade has developed from the successful B2C marketplace EeBria.com, which has been trading for two years. Working directly with breweries we discovered huge inefficiencies in the B2B market, and addressing these with EeBriaTrade is now a major focus of the business. We intend to become the go-to distributor for independent pubs, bars, restaurants and beer shops all over the UK.

By being much more flexible, efficient, cheaper and offering a much wider range than our competition we expect to gain market share at their expense. Distributors such as Matthew Clark (who have an annual revenue of c.£800m) and smaller more regional distributors such as LWC (£171m), James Clay (£24m), Nectar (£22m), Dayla (£23m), operate a more traditional warehouse model and these are the types of distributor from which we expect to take market share.

Operating a marketplace model means that we:
- Hold no stock, with none of the associated spoilage risk.
- Have no warehouse rent or management costs.
- Are highly scaleable.
- Have no minimum order size.
- Can pass on these margins so we are cheaper for pubs, and able to pay the breweries more

The founder of a small regional distributor applied to work for us, as he recognised that our model will cause a lot of issues for traditional businesses like his.

In the longer term there is the potential to roll-out our model internationally, with marketplaces set up within new countries, but also for cross-border sales, opening up a much larger market to all our breweries and pubs.

EeBriaTrade launched in late June 2015 and since then has seen strong growth across all key metrics:
- We now sell beers from over 100 breweries, including agreements to distribute beers for US, Italian, Estonian and Irish breweries.
- We have more than 900 registered outlets on EeBriaTrade.
- More than 600 product lines (we believe that this is more than any other distributor).
- Stock listed worth over £6m (which would take up 4,000 cubic metres if we had a warehouse!).
- Sales have grown by 89% per month since June.

Our breweries range from the very smallest, such as Northern Alchemy and Carbon Smith all the way up to large beer brands such as BrewDog, Innis & Gunn and Stone Brewing. This shows that our model is beneficial to all breweries regardless of their size. EeBria and EeBriaTrade make money by taking a percentage fee from every sale a brewery makes on the platform.

Delivery charges are added for each transaction and roughly reflect our cost price.

Logistically speaking EeBriaTrade works as follows:
- Breweries list their beers on the platform, setting the prices and availability.
- Pubs browse, select and pay.
- Brewers choose the collection date.
- Our courier picks up the beers with a full tracking system for the pub.
- The pub receives the order the next working day, having been given a one hour delivery window.
- After successful delivery we pay the brewery, less our fee.

Capital will be used to fund growth with a focus on acquiring new pub customers. Given that our model is a totally new way of working in B2B beer distribution we’re finding the best returns are from personal interactions with potential customers and explaining the benefits of EeBriaTrade. Once they have converted, we have a very good repeat rate of 67%. The main focus of the funds therefore is to hire a larger sales team.

In addition we want to do the following:
- Attend Marketing / Trade Events.
- Make small UI improvements to the platform to make product discovery easier. (Due to the huge choice of products currently available on EeBriaTrade).
- Provide short term payment terms to selected low risk pub groups.

Our initial focus is on the craft beer part of the market, worth approximately £650m in the UK, however our marketplace also caters for non-craft breweries and pubs.

Our main targets are:
- Independent pubs, and pubs in small chains (up to 10-15 pubs).
- Bottle Shops.
- Restaurants and cafes.

There are 59k pubs in the UK, and 88k premises with a full licence. We believe that our main targets represent approximately 30% of these premises.

We target pubs nationwide, as due to our innovative model, there is no area of the UK which is easier or cheaper for us to fulfil. We are able to work with all manner of business from pop-up events / small market stalls to large established chains, because we have a simple online user experience, flexible deliveries and crucially no minimum order size.

The UK is going through a huge beer boom, with the number of breweries growing 10% for three consecutive years, bringing the current total to 1,424. Craft beer has been a key driving force behind this trend and at least 23% of all breweries produce keg craft beers (up from 19% last year).

We feel it's obvious for all to see that beer distribution hasn't developed with the market - there are even some distributors who can only take orders by phone. It is a highly fragmented market filled with a large number of distributors of various sizes, focusing on specific regions. We strongly believe that no distributor using a traditional model is able to match the range and nationwide coverage that we offer.

Nationwide distributors don't have the setup to be able to handle the relatively small, and regularly changing range of beers from smaller breweries. Whilst regional distributors struggle to offer a wide range of breweries or a varied range of stock. From our B2C site, EeBria.com, we had strong established relationships with some of the best UK breweries, which we were able to capitalise upon for EeBriaTrade. Since launch, the brewery count has grown rapidly to over 100, with 44 in November alone, and with the vast majority of them approaching us.

We work with breweries of wide range of sizes from the very small, such as Northern Alchemy based in a shipping container, to large international craft breweries such as BrewDog. They each benefit in different ways from using our site, be it from accessing a large network of pubs, increasing their distribution range or increasing their revenue from their, often limited, beer production.

We acquire pubs through a wide range of channels. As we are doing something that is completely different to existing distributors, our key route to market is via our sales team. Speaking to pubs in person and on the phone gives us the best opportunity to explain our model, why it is a big improvement on their current provider and to convince them to try us. Once they make their first order most become regular customers. The average monthly spend per outlet has increased 15% monthly since June, with the speed of repeat typically increasing to fortnightly orders. As a result, recruiting a larger sales team, to enable us to contact more pubs is a key reason for this investment round.

Further to the sales team, we access pubs through a variety of other means including online and offline marketing.

By having a large nationwide network of breweries, we are also able to easily reach pubs all over the UK, through association, search and referrals. EeBriaTrade is a completely different approach to the beer distribution market, using technology to give us a wide range of benefits above our competitors, so we:
- Are cheaper for pubs.
- Pay breweries more.
- Offer a wider product range, of better and fresher beer.
- Provide a wider geographical reach for both breweries and pubs.
- Have flexible ordering and delivery, including no minimum order size (Ten orders of one keg is as economical as one order for 10 kegs).

Existing distributors are scared about how our approach will change the industry, to the extent that the founder of a small regional distributor even applied to work for us (with the intention of closing his business) as he saw our approach as an important shift in the market, which in the long term would make it very difficult for him to compete. Further to this a national distributor is known to regard us as "potential serious competition". Distributors are seeing what we're doing as a threat to their way of working.

To access the EeBria team biographies, including current ownership