We recommend that you read the Information Memorandum, together with the FAQ document, the Portfolio Update and the Deployment Policy attached to this campaign before investing.

The Fund will not be a “fund” in the traditional sense of the word but rather the investor will choose to make investments that are selected on the basis of predetermined objective criteria set for the Fund, with no discretion to be exercised by Seedrs.

Seedrs has one of the largest volumes of centralised venture capital dealflow in the UK.

In 2019 we are expecting approximately 15,000 deals to engage with the Seedrs platform. Out of this very large funnel we expect approximately 500 to launch a campaign on Seedrs, with 260 of those successfully hitting their funding target. The EIS100 Fund will then invest into approximately 100 of these deals. 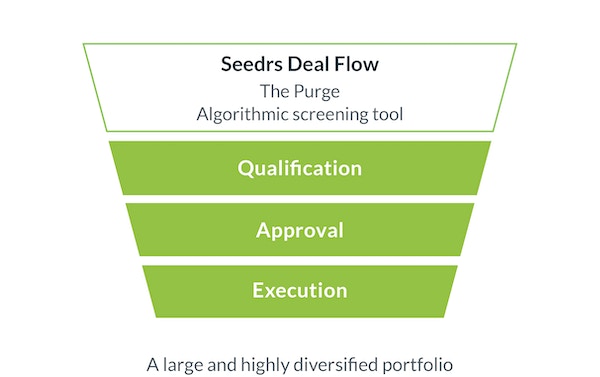 This is one of the largest but highly curated deal pipelines anywhere in the world, and will provide investors with a diversified pool of investments in a relatively short period of time of 12 months or less. 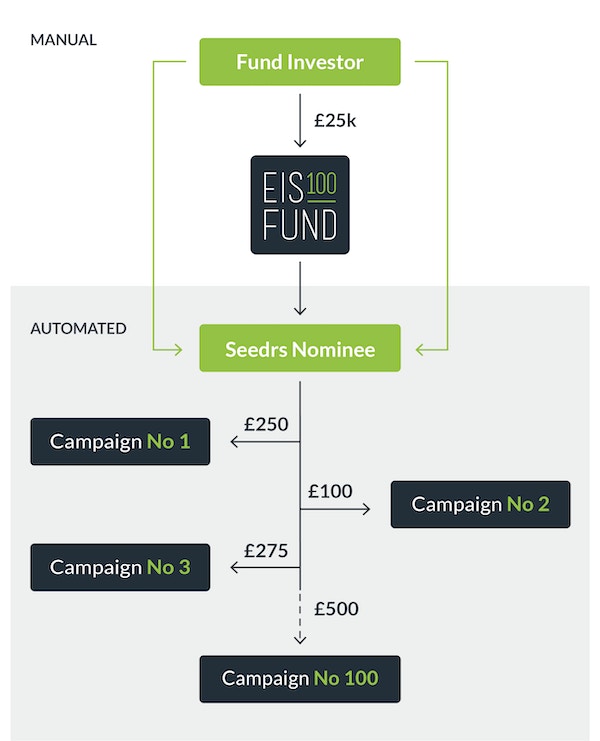 The Fund aims to invest in approximately 100 campaigns that are fundraising on the Seedrs platform in roughly 12 months. Using a proprietary algorithm, the Fund will deploy in any campaign that meets the following criteria:

A campaign must meet all of these conditions before capital is deployed:

Once a campaign becomes eligible, capital is deployed according to the following logic.

The Fund will only invest in EIS eligible deals. You can learn more about EIS in this short video:

The Seedrs portfolio page enables investors to view detailed analytics on their portfolios. This includes, among other things, the investor’s real-time IRR.

The volume of tax documentation associated with large portfolios of EIS-eligible investments can be burdensome. Seedrs has simplified this dramatically by digitising this entire process. Investors can access and download EIS3 certificates for each investment directly through the platform, and pull a consolidated tax summary that provides the details of all their investments that can be sorted by the relevant financial tax year.

An investor in the Fund will have access to the Seedrs Secondary Market, a place where investors can buy and sell shares in Seedrs funded companies. Fund investors will have the opportunity to sell shares in any of the individual businesses they have invested in through the Fund, not only separate from any other investments they have made through the Fund but also separate from any other Fund investors (subject to eligibility and demand). We believe this opportunity for potential liquidity adds significant value to an investor in the Fund. 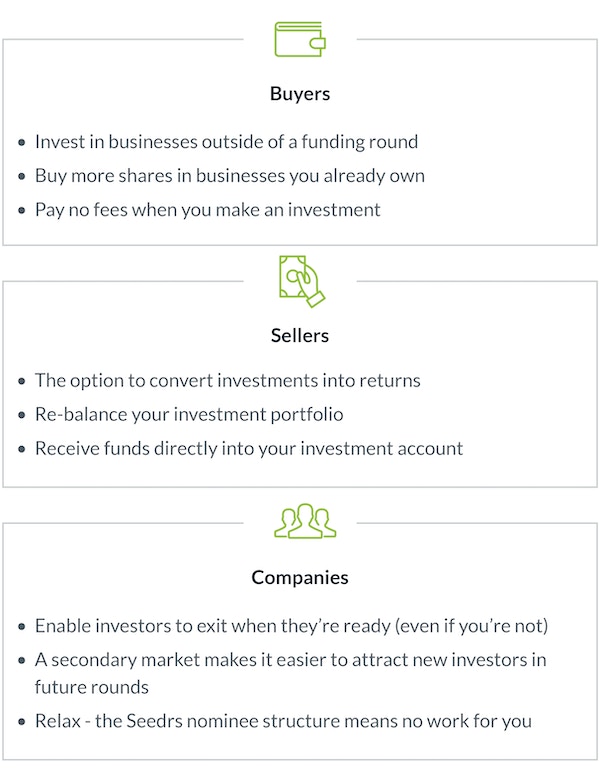 A passive approach to investing tends to require a lower fee than a more active approach, and we have approached the fees for this Fund in the same way.

Seedrs will charge Fund investors a platform fee of 0.25% of the investor’s total investment in the Fund over an eight-year period. We believe this 25 bps platform fee to be in line with the level of fees charged by passive funds in the public markets. For administrative simplicity, we will collect this platform fee as a single, upfront 2% deduction from each investor’s investment before the Fund begins deploying capital.

In addition to the platform fee, we charge a 7.5% carry on any returns from all investments made on the Seedrs platform and held under our nominee, including the Fund’s investments. When an investor receives a return from an investment in excess of the capital invested in that business, we will deduct 7.5% of the investor’s profit before distributing it to the investor.