Many consumers want to make a positive impact with their purchasing decisions. Chocolate is a widely popular product with per capita consumption of approximately 5kg per year in most of Europe.

Many people trust labels such as Fairtrade to make sure that their buying behaviour does good or at least doesn't mean miserable working conditions for workers along the value chain.

While it doesn't hurt you to pay 50 cents more for a bar of chocolate if it boasts a label indicating it has been ethically sourced, few people know that only a small portion of that actually reaches the country where the cocoa beans are from. Worse still, we've seen that there is only a minimal increase in the farmer's income, and nothing really changes. Countries in West Africa where most of our chocolate originates are still in poverty.

Fairafric aims to change that. By producing from bean to bar in Ghana, we aim to increase income per bar five-fold and create qualified, well-paid employment. We are taking the idea of fair & direct trade to a whole new level.

In the long run, fairafric’s mission is to reduce Africa’s dependency on raw material exports.

Our aim is to vastly increase our production volume and to create more jobs in Africa. We believe most of these jobs require a post high-school level of education, so they should allow the workers to provide for their families, enjoy full health care, and have enough funds for their children's higher education.

With a minimal marketing spend, we were able to win numerous online customers. At the end of 2018 close to 450 retail outlets stocked us and tens of thousands of consumers have already enjoyed fairafric chocolate. Now we are aiming to cater to this rising demand while spreading the Made in Africa story to a wider audience. 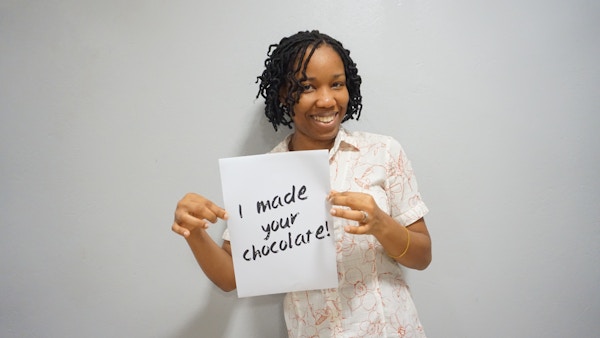 > April 2017 Organic Certification.
After landing 125 retail accounts by direct sales and a lot of media coverage we ran our second Kickstarter campaign to fund the organic certification of our supply chain and to introduce six new flavours. This round brought in close to 50,000€ and 1,200 pre-orders which we fulfilled in October 2017.

> June 2017 - Next Organic Startup Award.
This prestigious award opened countless doors for us. So far we've closed one of the largest German organic shop chains (55 locations) and are in conversations for further listings in the DACH market.

> August 2017 - Recognition As Preferred Supplier.
There are more than 800 One World Shops in Germany alone. This is where we meet our core customer group and the recognition as a preferred supplier is a major milestone for us. It means that we've been fully vetted and none of the single shops need to do any due diligence on us before placing orders.

> December 2018 – Revenue.
The company has grown vastly during the last year and was even able to become profitable with revenues at €380,000, although it was out of stock for more than half of 2018.

> March 2019 – Collaboration with Ludwig Weinrich GmbH & Co. KG.
Cord Budde (CEO, Weinrich) is equipped with a broad knowledge base in large-scale chocolate production. Passionate about Ghana and inspired by fairafric’s mission, he decided to join forces with us in order to build a state of the art chocolate factory in Ghana. > One World Shops.
This is where we found most of our first customers and where we consider ourselves to be particularly strong. We've seen that shops have been open to listing us and even willing to up-sell to their customers by explaining why Fairafric has so much more impact in Africa. Here we've found our most loyal customers.

> B2C.
We currently sell directly to consumers through our online shop and fairs. We also plan to launch our ambassador program this year, with the intention to generate sales. We've run two successful Kickstarter campaigns and are considering more campaigns for future product launches. We are facing a big challenge right now: The demand for fairafric is constantly higher than its production due to our limited factory capacities with our partners in Ghana. It is about time to take a bold step ahead.

In order to scale our production, fairafric teamed up with Weinrich’s engineering crew: Together we will build a brand new chocolate factory in the country of cocoa origin, Ghana.

The solar powered state of the art factory will be the biggest employer in the area, which we estimate could create more than 50 jobs. The whole factory layout has been created with future capacity expansions in mind.

On top of that, we will incorporate a visitor concept, in which you can tour a model farm and experience our chocolate production process right afterwards. You will also be able to see our chocolatiers being trained in our on-site chocolate school.

Please note, the company has outstanding loans of a total of €91,500 with an interest rate of 5% pa. These are to be repaid by October 2020. None of the funds raised in this round will be used to repay these loans. To access the fairafric team biographies, including current ownership