Filmies is about helping users discover films that match their personality, mood and taste.

The average film fan takes 22 minutes to decide what film to watch*. Filmies aims to reduce that to get film fans doing what they want to do; sit down and watch!

Filmies gives users trusted film recommendations from people they know, who have opinions they value. This provides credibility; each recommendation comes from a real person with a face and name, rather than a complex algorithm.

Users have the option to click to third party websites to purchase, stream or download the film. John is a film fan and wants to watch a film right now with his housemate.

They begin to search the internet for inspiration, wanting to discover a film that exactly matches their tastes, personalities, mood and situation.

Getting to the point where they actually start watching a film can be a long time. Filmies aims to help in this situation.

The Filmies app contains a community-curated set of data tags applied to films. These tags then enable discovery in search. Tags consist not only of genre but also characteristic, mood, emotion, description. So users can discover a film by a much broader range of tags.

Filmies focuses on the film watcher, not the reviewer.

Filmies has a large social component which provides users like John with film recommendations from REAL PEOPLE, not algorithms. People who are genuine film fans like John, whose opinion John trusts and who like similar films to him. No algorithms and no bias. John can bring all of his film conversations online. John is able to maintain control over the types of recommendations he receives, as he receives only recommendations of the other filmies that he chooses to follow. If John doesn't like the recommendations he is receiving from another user, he can simply unfollow them.

Filmies also aims to eliminate a lot of the 'noise' around film recommendations. The concept is that users simply recommend films to others; an entirely different concept than 'reviewing' which ultimately may end up with neither a positive nor a negative recommendation of the film. Filmies launched a website for Beta testing in October 2013. It currently has 220 registered users, predominantly a combination of friends and associates of the founders, as well as a number of key influencers identified on other social networks. This includes film bloggers, writers etc and other keen film enthusiasts interested in the filmies concept.

For our iOS app launch (for which this campaign relates) we will use our small but engaged following as an initial testing base for filmies, as well as a broader group of testers. This will enable us to build the tag database prior to hard launch.

To date, web design and development has been provided by external parties, and funded by filmies' founders incomes. Filmies also raised a small loan from the School for Start Ups. 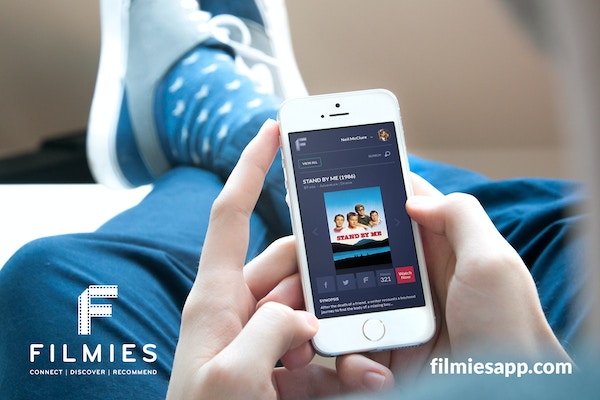 1) Affiliate / referral fees - Filmies generates revenue from referring sales to third parties (between 4-10% per sale or £4-£9 per new registered member for registration services). This revenue model has already been activated; filmies has registered affiliate relationships with Blinkbox, Amazon, iTunes, MovieMail.

2) Advertising - Filmies sells advertising space in users's feeds to film promoters. Advertisers can be targeted based on users specific film recommending activity. For example, a trailer for a new Ridley Scott sci-fi film can be posted in the feed of all filmies who have recommended either a film directed by Ridley Scott OR all filmies who have recommended a film in the Sci-fi genre in the past X months / years.

Filmies will also likely sell a small number of relevant and targeted adverts in the new weekly newsletter emails.

A number of possibilities are available to filmies for future revenue generation. We'd like to be a content provider, linking directly with independent film makers to offer a platform for distribution. Currently these future revenue streams are in ideation stage only. Filmies has made significant progress throughout 2014 on a relatively limited budget. However we need additional funding for our iOS app development ready for launch later in 2015. 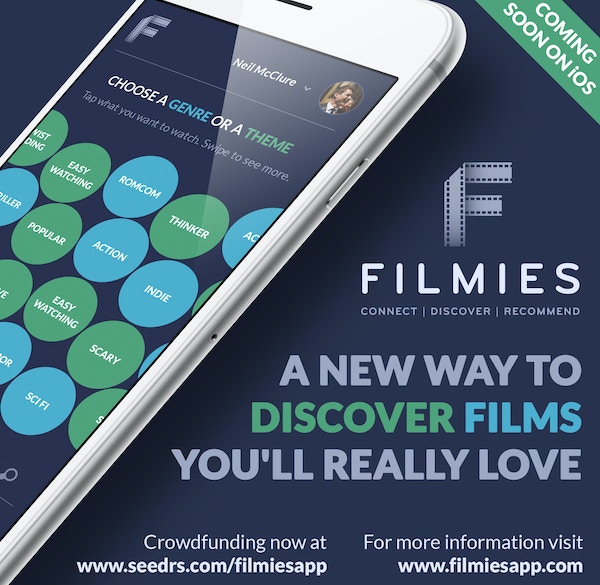 Coupled with rapid infrastructure and technology improvements, film fans are better equipped than ever to watch high quality films at home and on multiple, mobile devices.

Film recommendations are hugely influential in driving film viewing. There are two types; behavioural-based algorithm-driven recommendations (in 2012, 75% of items watched on Netflix were a result of a Netflix recommendation); whilst the other type is user-originated peer-to-peer recommendations. We found that frustration is building within film-watching communities around the former - film fans seem to place a growing emphasis on the latter.

Total online spend on films in the UK increased to £193m in 2013(BFI). Ofcom suggests that 25% of internet users aged 12+ have downloaded or streamed film content.

It is expected that the global digital film market (streaming and downloading) will grow 17% p.a to a $20bn market by 2018. (Blinkbox). Knowing that the target market is primarily those who are already familiar with multiple other social networks, the digital marketing strategy will primarily be based around existing social networks; facebook, Google+ and twitter. Pages are already established on these networks with active followings. We are in discussions with a leading freelance social media manager to build a social media content and campaign plan for pre-launch buzz-building and launch.

Filmies already has an established blog with two active unpaid bloggers creating topical and well-written articles, in order to assimilate content, build the brand and drive traffic to filmies. It is anticipated that this activity will ramp up around launch date.

A number of relationships have been built with existing film bloggers, film writers, journalists etc, to attempt to create a group of key influencers. These include those with twitter followers in the 000's, active bloggers, journalists of well known online and print media. These relationships will be utilised in order to get reviews and links in publications.

Filmies aims to meet the demand by creating initially an iOS app. Immediate plans also include development of an Android app.

In future, Filmies is also investigating the future potential development of a Smart TV application.

Filmies' USP is its simplicity, its community-curated data tagging system, and the focus on the user not the reviewer.

There are no complex algorithms that determine film recommendations, and all recommendations have a credible, trustworthy source i.e. another human being with a name and a face.

Compared to other social, peer-to-peer film sites, filmies is linear and straightforward. Comments and film reviews are secondary to the key activity of making a recommendation i.e. a positive affirmation of a film. Filmies can also create their own film communities, sharing film knowledge and comments.

Filmies recognises the importance of two key user groups; firstly recommenders and data taggers are the knowledge-holders, the film experts, and the ones who are happy to share their knowledge. Through gamification, the site incentivises this group to recommend, providing digital and real rewards for increased activity on the site. The second group of 'film-watchers' need inspiration in making decisions. The app is built to support both user journeys.

The filmies concept is different to that of 'reviewing' which ultimately may end up with neither a positive nor a negative recommendation of the film. Filmies simplified the film-watching decision process.

There are many current market offerings for the reviewer; Jinni, tastekid, Suggest Me Movie, criticker etc. However there are few offerings for connecting friends and creating networks of like-minded film fans in order to share film recommendations.

The two most similar competitors to filmies are letterboxd and seen that. Both have been launched in 2013. Both sites are focused towards the film reviewer, rather than the film-watcher, providing a platform for experts to provide their reviews, without really supporting the decision-making process of a keen but less well-informed film-watcher.