The Fully Charged Show is a YouTube channel dedicated to ‘the future of energy & transport’.

Established by actor, presenter & writer Robert Llewellyn, Fully Charged currently averages more than 3 million monthly episode views globally, with the record month reaching 4.6 million (August 2019).The channel is perfectly positioned as the World’s no.1 consumer channel for clean energy technologies and electric vehicles of all shapes and sizes, sales volumes of which are set to surge to many times their current size over the coming years.

Funded predominantly by individuals (Patreons) and advertising (Google AdSense) Fully Charged operated at breakeven before the launch of its live event (Fully Charged LIVE) in 2018. Profits from commercial activities are enabling Fully Charged to grow steadily, but a successful crowdfunding campaign will accelerate growth, maintain competitive advantage, and preserve the independence that has been key to its success so far.

Fully Charged is a broadcasting, digital and events business, with a strong, independent brand that can be extended across an array of relevant products and services. Fully Charged possesses ~2 million viewers and an archive of >500 high-quality episodes online. Focussed on the future of energy and transport, the business is a thought-leader in electric vehicles of all shapes and sizes plus clean energy technologies like wind & solar.

Our vision and mission is clear: ‘To inspire the world to stop burning stuff’ and ‘to be the no.1 consumer channel for clean energy and electric vehicles’. The principle objective of the next 5 years is to grow the audience from 2 million at the start of 2020, to 15 million at the end of 2024. - Supported by circa 3,800 Patrons that contribute.

- More requests to work with us (including appearances, episode suggestions & commercial approaches) than the current team can process. The strategy involves accelerating audience growth, which will:

Furthermore, there is an incredible array of commercial opportunities to consider for Fully Charged, Focus areas for 2020-2022 include:

We believe that all of the revenue streams above will be increased by audience growth in the same timeframes. 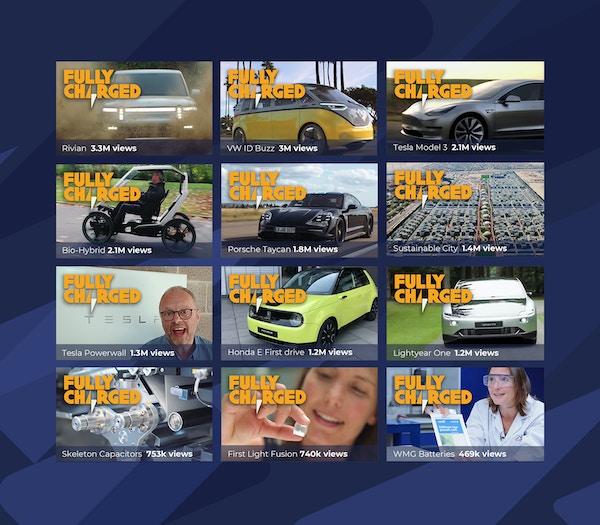 It is our stated intention that the final funds will be invested largely in additional staff/freelancers to drive audience and financial growth:

Additional funds will be invested in audience growth plus a larger production office at Bristol & Bath Science Park.