Gazeal is on a mission to revolutionise the home buying and selling process by introducing speed, transparency, and security. We believe the system for transferring property in England and Wales is broken. The Gazeal platform helps the seller prepare key information about their property right from the start. The estate agent shares this with buyers, helping them make an informed decision and providing transparency much earlier in the process.

A well-informed buyer is much more likely to make an informed, realistic offer on a property, and much less likely to pull out of the sale at a later stage.

After an offer has been agreed upon, both parties can show commitment to each other by signing our digital Reservation Agreement and deciding on the level of Guarantee they would like without having to worry about old fashioned holding deposits.

Gazeal guarantees the buyer and seller's commitment to each other and will pay out to the injured party, if the agreement is breached without good reason.

We have received an overwhelmingly positive response from the general public and the estate agent industry, which we believe indicates the public's desire for positive change.

- Best of all, we have seen a 70% decrease in property sales collapsing when using our Reservation Agreements

- Gazeal helps all parties involved in the transaction and we are working with innovative estate agents that want to improve the market. We currently have in excess of 275 estate agent branches signed up to the Gazeal platform.

- We have received positive coverage in both industry and national press including Forbes and The Times. - We have been nominated for multiple awards and previously won Prop Tech Company of the Year. - Gazeal was nominated "Most Collaborative Company in PropTech" at the prestigious Negotiator Awards. We have continued this tradition and earlier this year:

- PWC selected Gazeal, to be part of Tysl, its next generation digital banking platform; and

- Gazeal is a licensee of the Law Society of England and Wales. - Gazeal has raised in excess of £3m to date from investment firms, a pre IPO fund and high net worth individuals. 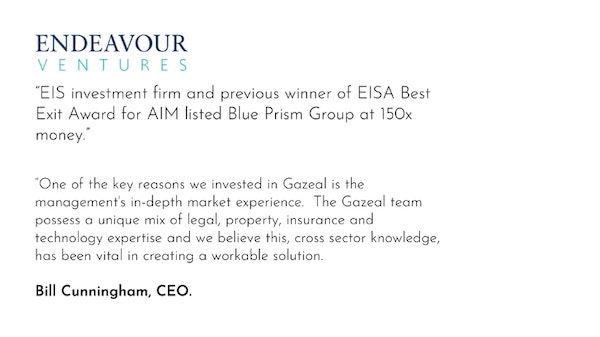 Gazeal operates a B2B2C model with Estate Agents forming our route to market. We licence the Gazeal digital platform directly to Estate Agents without cost.

After an offer has been agreed upon, the estate agent can have the buyer and seller confirm commitment to each other by signing our digital Reservation Agreement and deciding on the level of Guarantee they would like to put in place.

Gazeal guarantees the buyer and seller's commitment to each other and pays out to the injured party, if the agreement is breached without good reason.

We charge the buyer and seller directly depending on the level of Guarantee requested. 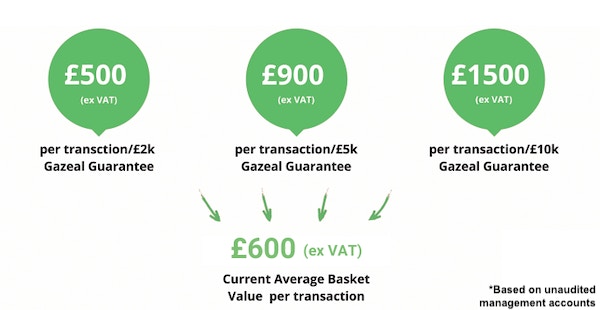 The majoirty of our transactions see the buyer and seller split the price of the Guarantee. The Gazeal platform can facilitate either the buyer or seller paying the entire fee where this is preferred.

Our aim is to future proof the market by leading from the front.

If a deal collapses it can take signifcant time and money to get back into the market again.

Nobody wants the pain, heartache and financial loss of broken property sales anymore. Now the power is in your hands.

We need to rapidly grow our team so we can keep up with demand and expand our marketing reach, telling more people about Gazeal so that we can help them move securely.

The company has an outstanding Future Fund Convertible Loan Note of £600,000 entered into in October 2020 which will convert into equity as part of this funding round.

The principal amount of this agreement has been factored into the pre-money figure of the campaign. The amount accrued under interest has not been factored in, as this will depend on when the conversion occurs.

The terms of this Convertible Loan Note are as follows:

1. £600k loan from individuals and the Future Fund with the following key terms:

- Discount: 30%
- Interest: 8%
- No valuation cap
- Longstop: 29th October 2023
- Share Class: Ordinary
- Conversion will be triggered as part of this round through one of the two scenarios below:

1. Qualified Financing: Means the Company raising £600k through a bona fide equity financing round. The loan will automatically convert to equity if this campaign raises over £600k.

Please note that the share price for the round is £0.738. The investment multiple used for this campaign is £7.38 for 10 shares in the company.