The plant-based dating and friend-finding app

Grazer is a dating and friend-finding app for vegans and vegetarians. A networking hub, connecting the consciously like-minded through meat-less matches.

We’re on a mission to inspire the new wave of veganism by uniting and empowering the plant-based community across the world.

52% of vegans and 39% of vegetarians would not date a meat-eater. We know how difficult it can be for vegans and veggies to find a like-minded friend or partner. 41% of online daters on mainstream dating apps are put off when someone mentions the word vegan on their profile. So we built Grazer, a platform dedicated solely for plant-based connection. 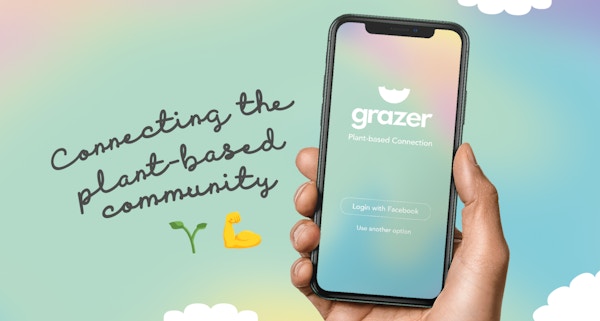 The plant-based movement is accelerating rapidly, especially with GenZ. The dating app sector is set to grow to £3.4B by 2025 when an estimated 25% of Brits will be vegan or vegetarian.

With the growing pressures of the climate crisis, we believe the time is now to inspire the plant-based revolution. Own part of the revolution, invest in Grazer today.

We launched Grazer and reached the Top 50 Free Lifestyle Apps in the App Store and Top 101 on Google Play.

We’ve sparked connections all over the world, we’ve built friendships, created multiple relationships and even marriages. Here are just some of our success stories :) We’ve done all this while only spending a total of £2,000 on online advertising.

In 2020 we introduced our friend-finding feature. Now, 18% of our users are actively looking for friends on Grazer. In 2017, Bumble’s BFF feature was used by an estimated 3% of their users.

In April 2021, Charlotte Elizabeth officially joined the team as a co-founder & CMO. Charlotte was previously a founding team member for a dating app where she oversaw marketing efforts from 0 to over 100,000 users across both the UK and US.

51% of our user base are female, which is rare for a dating app. Comparatively, an estimated 43% of Tinder and 46% of Bumble users are female.

Revenue in the Online Dating sector was projected to reach £2.7B in 2021. We will be using a freemium revenue model that is synonymous with dating apps.

We currently have one paid feature, a rewind feature we call ‘Second Chance’. Users get to rewind their previous swipes and give profiles a second chance to match.

A fundamental part of Grazer is our swipe system that we call, ‘Grazing on Grazer’. Our users are limited to 30 swipes every 4 hours. We want to create a more mindful, conscious dating space where people are encouraged to use Grazer little and often throughout the day. We’re set to add an unlimited swipe feature later this year, which will be a one-off payment. Our revenue will be optimized in Y2 with the introduction of a premium subscription service. This subscription will include features only available through subscribing.

In 2023, we intend to introduce advertising on Grazer. Users will get access to deals and promotions from vegan brands, nearby restaurants and events.

Your investment will be driven mostly into our marketing efforts, focussing on customer acquisition across four key fields: paid marketing, influencer marketing, PR and events.

Our marketing strategy will expand Grazer city by city across highly targeted locations, to reach a critical mass of users in each region. We’ve seen early success through ad testing, achieving a cost per user acquisition rate of £1.50. Working with a network of plant-based influencers will increase our brand awareness amongst the plant-curious GenZ.

Our team will expand with 2 key hires, a Mobile Application Developer and CTO/ Back-End developer.