HAPPY DAYS is a new musical by the creator of the TV show, Garry Marshall. 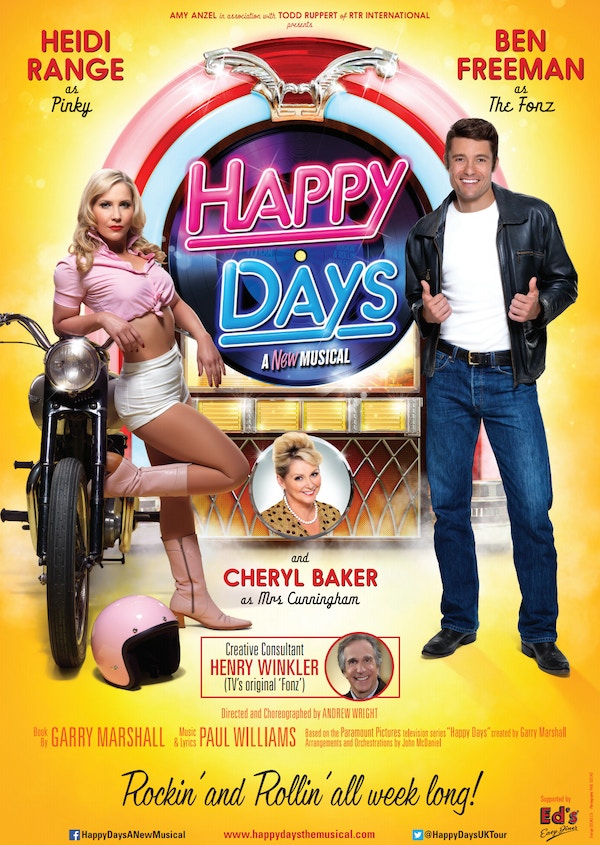 HAPPY DAYS - A NEW MUSICAL is a brand new production and will be the UK premiere of this fun feel-good musical based on the hit TV show.

The show has been written by the creator of the TV show, Garry Marshall. Garry is also a legendary Hollywood director having directed films such as Pretty Woman, Beaches, and The Princess Diaries.

The music and lyrics are by Oscar, Grammy and Golden Globe winning Hall of Fame songwriter Paul Williams. Paul is best known for his hit songs of the 70's including The Carpenters' 'We've Only Just Begun', 'Rainy Days and Mondays', 'The Rainbow Connection' from The Muppet Movie, 'Evergreen' and Bugsy Malone.

Henry Winkler, the original Fonz from the TV show, will serve as Creative Consultant.

This UK Premiere will undertake a 24-week National Tour beginning in January 2014 with the intention of subsequently coming into the West End.

The show will star Ben Freeman of Emmerdale fame as The Fonz, Cheryl Baker formerly of Bucks Fizz as Mrs. Cunningham, and popstar Heidi Range as Pinky Tuscadero, Fonzie's love interest. Heidi is best known for being the longest serving member of the Sugababes.

We think this new musical has the potential to be huge.

Following in the footsteps of such 1950's Americana shows like Grease, Hairspray, and Jersey Boys, HAPPY DAYS - A NEW MUSICAL has the potential to be the next big hit musical by again taking people down 'memory lane' to the halcyon days of the 1950's complete with varsity sweaters, hula hoops, jukeboxes, and sock hops!

We hope that HAPPY DAYS - A NEW MUSICAL will not only bring people back to those 'Happy Days', but the success of the Happy Days TV show can be translated to a similar level of success on the stage. We believe it's a fantastic piece of theatre having been written by extremely talented seasoned writers, which will also bring a sense of nostalgia into the lives of those who see the production. The characters from the TV show are all there - Richie, Ralph Malph, Mr. & Mrs. C, Joanie, Chachi, and of course, the beloved hometown hero, Arthur 'The Fonz' Fonzarelli.

The fact that this is not just another jukebox musical, but rather an original music musical is refreshing. The TV show theme song is also featured in the show. The creative team and cast are in place. As previously mentioned, the show has been written by the legendary creator of the TV show, Garry Marshall. The music and lyrics are by Oscar, Grammy, and Golden Globe winning Hall of Fame Songwriter, Paul Williams. Henry Winkler, the original Fonz from the TV show, will serve as Creative Consultant, working alongside the director in creating the 'Happy Days' world of 1959 America and guiding the cast in creating their ever so familiar characters, especially that of 'The Fonz'. The show will be directed and choreographed by Olivier award nominee Andrew Wright whose most recent work includes Chichester Festival Theatre's and Cameron Mackintosh's Barnum. A detailed PR and marketing strategy is in now in place and well under way for the UK tour of HAPPY DAYS.

Raw PR, who specialises in press and PR for theatre and dance, is working on the campaign. Raw PR is also the in-house Press Associate for Cameron Mackintosh Ltd. (http://rawpr.co.uk).

The 24-week UK tour is planned to comprise 7 to 8 performances in each city/venue with all operations and logistics defined.

Ticket prices will be determined by each venue jointly by the venue manager and our marketing representative, Richie Kester. The prices will vary from venue to venue from £10 - £40. In determining the price, the venue manager and marketing representative run a comparison analysis with other musicals that have played in that venue recently and decide on competitive yet affordable pricing.

We are raising part of the £600,000 Production Costs (which represents £500,000 costs plus £100,000 reserve) on the Seedrs platform, and part of it from external investors. All external and Seedrs investors will be receiving the same terms, other than Todd Ruppert who will be receiving slightly preferential terms in exchange for his role as Co-Producer.

As is common in theatre productions, investors will receive both a share of Net Receipts as well as a share of the production's Adjusted Net Profit.

Distributions will be made as soon as practicable after the 24 week tour has been completed.

* Adjusted Net Profit is the profit of the production after the payment of all costs.

* The authors are entitled to a 5% share of the Adjusted Net Profit, subject to a standard condition that 110% of the Production Costs have been recouped. The money raised from the Seedrs community will be used towards the £600,000 Production Costs (from inception to Opening Night). HAPPY DAYS - A NEW MUSICAL is generally for those who enjoy arts and entertainment.

The production is not just for musical theatre lovers...it's for those who loved the Happy Days TV show, those that enjoy 1950's nostalgia, and those that like great music and entertainment.

Popstar Heidi Range, best known for being the longest serving member of the Sugababes, as Pinky Tuscadero will cater to the younger audiences as will Ben Freeman of Emmerdale fame who will be playing The Fonz. Cheryl Baker formerly of Bucks Fizz as Mrs. Cunningham will cater to the older audience members.

Although the HAPPY DAYS brand lends itself to people in their mid-thirties to senior citizens due to the fact that the original run of the TV show was on ITV in the 1970s and 1980s, the TV show was also on as reruns on Channel 4 in the 1990s and early 2000s.

The TV show Happy Days was one of the most successful series in television history. It ran for ten years (1974-1984) with millions tuning in each week to watch the Cunninghams, a 1950s family living in middle America during an idyllic time with naive teenager Richie (Ron Howard), his wise father Howard (Tom Bosley), doting mother Marion (Marion Ross), and precocious little sister Joanie (Erin Moran).

The show was Number 1 in its time slot for over four years. More than 30 million viewers tuned in weekly. The popularity of Happy Days proved so large that after an episode in which Fonzie got a library card, U.S. libraries reported a 500-percent increase in cards issued. Although Happy Days changed quite a bit over its 10-year run, its ratings were strong for most of that time. The nostalgia and innocence of the half-hour morality tale became a refuge for many people during a turbulent decade.

The TV show also spawned several sequels including 'Mork and Mindy' and 'Joanie Loves Chachi'. The show launched the careers of not only Garry Marshall, the creator, but also his sister, director and actress Penny Marshall, director Ron Howard and of course actor, director, and producer Henry Winkler. The show was an international success as well being subsequently broadcast in 126 countries and proving extremely popular in the UK. Its original run was on ITV in the 1970s and 1980s. It reran on Channel 4 in the 1990s and 2000s.

Many generations of people, from those in their twenties to senior citizens, know and love the TV show, the characters, and the TV theme song. We are confident that the popularity of the TV show will translate into success on the stage.

HAPPY DAYS - A NEW MUSICAL will reach the public through marketing, press, and word of mouth.

Our Press Release with our 'star' casting went out recently and we had a tremendous response from the Press - television, magazines, newspapers, radio, and online have all expressed interest in covering HAPPY DAYS - A NEW MUSICAL as we get closer to opening.

We feel we have a very strong marketing team and publicity team currently working on lining up interviews, appearances, and other forms of coverage.

HAPPY DAYS - A NEW MUSICAL is a brand new musical, which is refreshing in a market that is saturated with revivals.

And despite being a new show, there is great brand recognition due to the popularity of the Happy Days TV show. Not only is the title well known, but the characters are as well - Richie, Ralph Malph, Potsie, Mr& Mrs C, Pinky Tuscadero, Joanie, Chachi, and the extremely popular Arthur 'The Fonz' Fonzarelli (made famous on the TV show by Henry Winkler, who will also be serving as our Creative Consultant).

Not to mention the Happy Days theme tune, which instantly brings a smile to one's face, is heard throughout the show.

To access the Happy Days team biographies, including current ownership