The Kuju Startups Fund will allow you to invest in a diverse portfolio of video game developers on mobile, tablet and PC platforms.

Kuju Startups is an exciting new programme seeking to find, invest in and mentor the UK's most promising early-stage games companies. With the full support of Kuju Entertainment - one of the UK's leading video game developers - each startup will receive hands-on support in taking their product from concept to market. Focusing on the high growth mobile, tablet and PC sectors, each company will receive a gross investment of up to £150,000 in return for equity (up to a maximum of 40%) in their business.

Why the UK Video Games Market?

We believe the UK is an exceptionally strong market for both the consumption and development of video games. With a domestic audience of 34 million gamers, and a market value of £3.2 billion, the UK is the 5th largest in the world.

The UK also has an outstanding pedigree for game development - we are renowned as the birthplace for some of the world's most iconic franchises. Famous titles, such as Grand Theft Auto, Tomb Raider and LittleBigPlanet, are prime examples of the UK's development talent. Combined, these titles alone have recorded global sales of over 197 million units, and serve to illustrate the UK's excellence in developing products with fantastic international appeal.

Why Focus on Mobile, Tablet and PC?

It is widely acknowledged that mobile, tablet and PC gaming are exciting growth sectors. Combined, these markets are expected to grow year-on-year at 16.5% to reach a staggering global value of $28.9 billion by 2016. For comparison, these growth rates far surpass those expected of other entertainment markets, such as Film (3.5%), TV subscriptions (4.4%) or Music (1.6%), over the same period. From very little capital input to huge international success, foreign multibillion dollar companies such as Rovio, Supercell and Valve provide proof that rapid expansion is possible within the mobile, tablet and PC markets. Here in the UK, we believe that our creative excellence in games can easily rival the successes of these companies. However, Great Britain's games startups are commonly recognised as being underserved by early-stage finance. This presents a missed opportunity for both developers and investors. With 41% of developers citing this as their primary obstacle to growth, we need to improve access to early-stage finance, if we are to produce the next billion pound game company within the UK.

The Kuju Startups Fund aims to tackle this very problem by providing early-stage finance to the UK's most promising developers, and if only one of our startups goes on to replicating the same success of other game companies, then the returns could be significant.

Why the Kuju Startups Fund? The Kuju Startups Fund will allow you to directly invest in a diverse portfolio of video games on mobile, tablet and PC devices. This is a great opportunity and your investment will help bring several products to market which could one day be played by millions of people worldwide.

Your investments will also have the full support of Kuju Entertainment (www.kuju.com) - one of the UK's leading independent developers. Kuju, founded in 1998, are working with world-leading publishers, such as Microsoft, Nintendo and Ubisoft and have shipped over 120 titles across 14 different devices. Some of our most famous hits include: Powerstar Golf on the Xbox One, Disney Sing It!, Zumba, Rabbids, Art Academy, House of the Dead and Silent Hill.

And the support doesn't stop there. Kuju have established a dedicated Startups Team and joined forces with highly experienced industry leaders with a combined experience of over 120 years between them.

Drawing on Kuju's resources, the Kuju Startups Fund will also benefit from the following advantages:

In our view, the Kuju's Startups Team has a far-reaching network in the indie and investment communities, and typically discovers high-quality investment opportunities through one of the following sources:

Each applicant will undergo a thorough due diligence process that evaluates the business on the following grounds:

Each company will then be screened for approval by the Kuju Startups Team and Advisory Panel.

Producing a high-quality product is paramount to us. Senior employees from Kuju's production, programming, design, art and audio departments will be actively involved in overseeing the operations of each portfolio company, and will help sign-off key milestones in each project.

Kuju will also assist companies with administration, business development, marketing and PR, allowing the studios to focus on what they do best - creating great video game products and experiences. 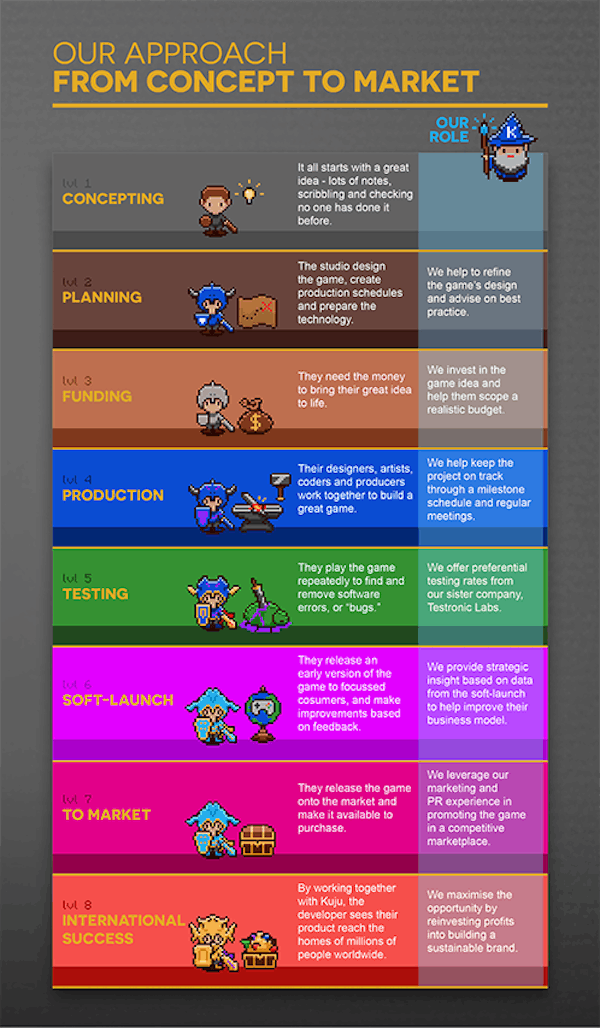 The Kuju Startups Fund benefits from a highly experienced advisory panel, comprising some of the industry's most prominent leaders. Members from the advisory panel will be appointed as directors to each portfolio company, and will help to mentor and guide the strategy of each studio.

In our first fund we are looking to raise a minimum of £300,000. Each studio in the portfolio shall receive a maximum gross investment of £150,000 into the company which holds the video game. This means that we will only invest in one game per company. The decision as to how much to invest will also depend on the scale of the projects being developed. The amount of equity offered in exchange for the investment will be decided at the time depending on what stage of development each studio startup is in. Your investment decision is therefore based on your view of Kuju's ability to attract and select appealing studio startups and support them through the development process. Investors' funds, net of the Seedrs fee, will be held in escrow by Seedrs until the studio startups have been selected, and then Seedrs acting as nominee will directly invest in each company once Seedrs has successfully completed its legal due diligence on the relevant company. Seedrs will then hold your shares as nominee (in the same way that it does for all startups that raise money through its platform). Kuju will charge each studio startup a support fee equal to 3% per annum of the gross investment received by the startup until such startup leaves the programme. In addition, Kuju will receive share options in each studio startup equal to 10% of the company with a strike price equal to the price per share at the time of the Seedrs investment.

All investments will be SEIS-eligible. Kuju will only identify studio startups that it expects will qualify for SEIS relief, and Seedrs will only complete an investment in each startup after HMRC has granted advanced assurance to it. Because your investment will be made into each startup individually, rather than into an intermediate vehicle, you will be eligible for SEIS relief on each such investment to the extent that it is granted by HMRC.

Travis Winstanley is co-founder and Games Investment Director for the Kuju Startups Fund. Travis leads the design of new funds, and the financial evaluation and implementation of investments.

Derek De Filippo is co-founder and the Business Development Director for the Kuju Startups Fund. Derek is heading the fund's operations, and the production and business development of each portfolio company.

Dominic Wheatley is the CEO of Kuju Entertainment Ltd. Dominic was previously the CEO and founder of Domark (subsequently Eidos Plc), publishers of the enormously successful Lara Croft: Tomb Raider and Championship Manager video game titles, where he grew the business to become one of the largest international game publishers.

Gary Bracey is the Commercial Director of Kuju Entertainment, and is a highly respected veteran of the video games industry. From over 30 years of industry experience, Gary has overseen a string of successful developments and product launches, including Jurassic Park, Robocop and Rambo. Gary remains an influential figure in the industry, and was appointed to the board of TIGA in July 2013.

Paul Mottram is the Studio Head of Zoë Mode and brings over 18 years industry experience in bringing innovative video games to market. Paul has overseen the development of numerous successful titles for Zoë Mode including, Powerstar Golf on the Xbox One, the Zumba Fitness franchise and hit indie titles Crush and Chime.

Ben Hebb is the Director of Art and Production of Zoe Mode and has led the studio's art team since the beginning, in a career spanning over 18 years. Ben has defined Zoe Mode's unique art team by combining traditional game artists with talent from TV, film and advertising. Ben has overseen the studio's visual development of new IPs such as Powerstar Golf, Disney Sing It, Crush, Chime Haunt and the Eyetoy: Play franchise.

Bradley Crooks is the Studio Head of Headstrong Games and is an entertainment industry veteran with over 25 years experience in TV, film, advertising and games. Bradley has worked in both game development and publishing signing new game deals with multimillion pound budgets and has worked on, and lead, titles such as The Sims 3, Crysis, Tearaway and Art Academy.

Oscar Clark is a leading industry figurehead and expert in mobile game design and monetisation. As a product and business strategist with more than 15 years experience, Oscar specialises in engaging video game communities and how to turn them into revenue. Recently, Oscar has released a guide on free-to-play game design to critical success.

Investing in a fund campaign allows you to invest in multiple businesses with one click of a button. When you invest in a fund on Seedrs, you will become a shareholder in each of the underlying businesses that the relevant fund organiser chooses.