LandEx is a European land investment platform aiming to bring farmland as an investment to every retail investor in the EU, EEA, and the UK.

Farmland is one of the best alternative asset classes today due to its finite supply, low volatility, uncorrelation with the stock market, and the growing demand and potential for high returns that we have seen during the last 10 years.

LandEx democratizes and facilitates access to farmland investment through its secure platform.

Investors can choose which plot to invest in and make informed decisions thanks to powerful analytics and data.

LandEx's lowest investment amount is only €10. There is no maximum investment sum.

The platform features a Secondary Market where LandEx users can buy and sell their shares; an Auto Invest function for users that want to automate their investment; and cashback to reward our most active investors.

LandEx is both available in a web trader and as an app. 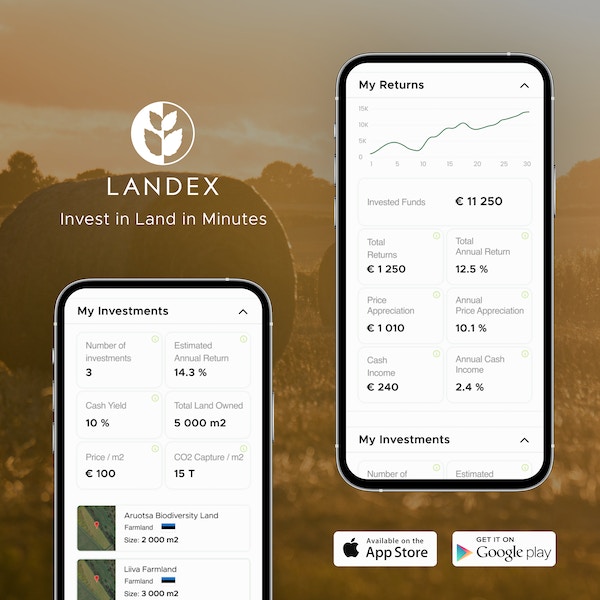 LandEx successfully raised €50k during a first pre-seed round in April 2021, and €178k a second time.

After a few intense months of development that began in April 2021, LandEx opened its marketplace to the public four months later.

Since then, more than 1,650 users from more than 26 countries have invested more than €383k in more than 17 listings which represent more than 70 hectares.

LandEx is available in English, Estonian, and German.

The platform offers every functionality of a modern investment marketplace such as cashback, Auto Invest, and a Secondary Market.

LandEx was featured in diverse German, British, Estonian, Spanish and Latvian media, blogs, and conferences. LandEx founders were also recognised in the "30 under 30" founders list organised by the Estonian Founder Society and Ärileht.

Finally, LandEx was one of the 15 startups selected out of 1350 competitors for the final of the EU Startup Summit 2022 in Barcelona.

LandEx generates revenue by taking fees on new plots listed in the primary market, on the sales of plots, and on transactions made in its Secondary Market

The fee structure is organized as follows:

The funds are intended to be invested in boosting LandEx's revenue-generating capacities, as well as becoming regulated by the Financial Supervisory Authority in Estonia.

Since LandEx earns money primarily by listing plots, the company aims to utilise the proceeds to upgrade its land acquisition capabilities on one hand, and enhance its marketing on the other.

On the land side, LandEx aspires to enter Lithuania, Romania, Spain, Portugal, and other European countries to diversify its offering and increase its plot listing rate.

Marketing-wise, efforts to attract new users in the German market will be ramped up while significant focus will be dedicated to the French-speaking regions of Europe (Belgium, Switzerland, and France).

LandEx also intends to add French as its latest language to its app and website.

Investors in this round are investing into and will become shareholders of Land Exchange OÜ (reg number: 16203774).

Landex is not currently regulated by the Estonian Financial Supervisory Authority. EU rules dictate that any European investment platform will need to be regulated by November 2023. The company intends to use approximately €15,000 from the funds raised in order to apply to be regulated by the (FSA) in Estonia (https://fi.ee/et). If the company is not able to be authorised then it may not be able to undertake its current business.