Nattr was founded with a simple goal in mind: to eliminate anxieties related to texting and decision making.

We’ve all been there. Where you receive a text and you have no idea what to say back, so you ask a friend. But what’s better than a second opinion? A dozen. Messaging is dominating communication. 23 billion text messages are sent every day, 266,000 every second and the industry is said to be worth over £200bn by 2016.

Numerous messaging services exist, however none we're aware of with a USP of having every message customised to you.

We believe we will be able to roll out the same platform in the fashion, food and fitness industry having Nattr being seen as a lifestyle connoisseur. Think of it as a live forum. Where in the past you would have to wait hours or days for a response - now we're down to minutes and by incorporating machine learning and natural language processing, we hope to be down to seconds in the future. 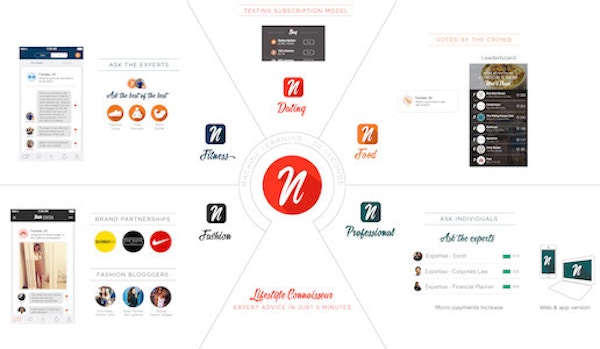 Teen Vogue wrote, 'This New App Will Write the Perfect Responses to All of Your Texts - You’ll never be at a loss for words again.' We've also been featured in The Guardian, Grazia, AskMen, Nylon and more. Part of Nattr’s secret sauce is our team of experts. Nattr is full of comedians, copywriters,screenwriters and dating coaches ready to respond to your messages.

This form of monetization has proven to be successful. Since it’s implementation in December 2015, our sales are growing by an average of 160% month-­on-­month.

In addition we are in the process of testing out a subscription model. How we'll use the funds

1. Growth - We aim to acquire 1M users in the next year and 5M by year two. We hope to achieve this by growing our team and expanding out to Android.

2. Innovate the Product –We've proven ourselves in the texting/dating vertical, we're looking forward to testing others starting with fashion.

Our current target audience is Millennials, the largest generation alive and they account for 1.8 billion out of 7 billion people worldwide. Millennials send on average 67 texts a day. Of which 75% are single and spend 18 hrs a day consuming media – mostly which is created by peers.

They are a mobile driven generation who constantly seek advice. Instead of creating a new behavior, we found a habit that already exists and we're building our product around that. Nattr plans on gaining initial traction from the dating market. According to Match over 40 million Americans have their love lives wired. Pew Research states: Online & Mobile dating has tripled since 2013, boasting over 15M Millennials signed up in the USA alone.

According to The Huffington Post the dating industry is estimated to be worth more than £2bn. Over 1.3 billion people will use their phone for dating purposes. Nattr isn’t competing with any app or platform for market share, as it overlays the entire industry.

Anytime a user is struggling for the words to say on any social platform (dating or not) Nattr can be used.

Numerous messaging services exist, however none with a USP of having every message customized to you.

Nattr is able to offer an unbiased response 24/7 in 5 minutes or less.

Our findings and opinions on others:

Crowdpilot
allows you to crowdsource social interactions by allowing friends or strangers to listen in and assist you in any situation. The app gives situational advice while relying on others to listen in on a call. Crowdpilot relies on timing and availability, which in theory could be a big constraint.

BroApp
Designed for men to outsource relationships and spend more time with the bros by sending automated texts to girlfriends. The app doesn’t ask for responses to text messages, instead it prevents you from forgetting to text your girlfriend and prides itself on keeping men out of the doghouse.

HeTexted
Where females go to vent about their relationship issues. The information given is very situational and acts solely as a utility with no aspect of entertainment.

Textpert
An app based on responding to text messages. Very similar concept however executed entirely different. Textpert does not have a public feed of any kind. You simply receive a notification that someone needs a response.

To access the Nattr team biographies, including current ownership