Profile
Frozen vegan pizza range to be sold in supermarkets, health shops & restaurants throughout the UK/Europe. We aim to be the number one frozen vegan pizza brand in the UK within 12 months, (and then move into Europe in year 2 and 3), bringing a vegan alternative to one of the most popular fast foods in the world to mainstream retailers. We are going to achieve this by developing a range of high quality, healthy and great tasting pizzas in as ethical and fun way as possible through a company funded by the community it seeks to serve.

The range of pizzas is expected to be available in specialist health food shops initially, but we hope to be in the main stream supermarkets within 12 months. We will also target restaurants that want to include a "fast food" vegan option in the menus. The One Planet Pizza Company is a new company which will make what it says on the pizza box… great tasting, wholesome, and vegan frozen pizzas. The company is being set up by experienced vegan and vegetarian business people, and will use vegan and vegetarian suppliers wherever we can. But most importantly we want to fund it through “veginvestment” so it is actually owned by the vegan, veggie and "veg curious" community.

That’s why at the start, we are crowd funding 25% of the equity of the company, so that like minded people who want to invest as little as £10 (and up to a maximum of £500), can be part of a new company operating in a dynamic and ethical way. We want to bring frozen vegan pizzas into main stream shops across Europe in the next 24 months, and we want our shareholders, or “veganistas” as we like to think of them, to help us do it.
We want our investors to:

• Help us to develop the brand and pizza range

• Promote the pizza range through their own networks and vegan friends

• Help us decide which charities should benefit through our One Planet Pizza Fund, to which we will be donate 10% of our profits to each year Although One Planet Pizza is a start-up business, it is being born out of existing, successful business’s currently operating in the vegetarian/vegan food sector.

Two of the key management team already run two veggie/vegan restaurants in East Anglia, as well as producing a range of vegan “redi-meals”, which are sold from the restaurant outlets. The business has a commercial kitchen, already up and running, producing hundreds of frozen redi-meals each week. One Planet Pizza will distribute these redi-meals as well as the new pizza range.

In addition One Planet Pizza has “signed up” several leading vegan bloggers/networkers, who are investors in the business and have committed to help develop and promote the brand. These are listed in our team section.

Finally we are headline sponsors at Vevolution, the leading vegan networking event in the UK. This event is taking place in November in London and will be our official launch, the event is attended by over 400 vegan activists. Our business model is to produce a range of frozen vegan pizzas and then sell them in 3 key ways:

1) Through direct home delivery, initially in 2 or 3 selected locations that have a strong veggie/vegan community - Norwich, Brighton and Bristol.

2) Through independent wholefood/healthfood stores throughout the UK. There are over 700 of these in the UK.

3) Through the medium and large supermarket chains, that currently do not provide a vegan pizza option.

In addition we may also look at the catering/restaurant sector, as non vegetarian caterers are looking to have an easy vegan option on their menu, our frozen range could provide the solution.

We intend to distribute our range both direct and through wholesalers. We are in discussion with a major specialist retailer already who has expressed interest in our new range, plus Bute Island Foods- our vegan cheese supplier - have an extensive network of contacts amongst retailers and wholesalers that they are happy to introduce us to, both in the UK and in Europe. The proceeds from the crowdfunding will be used for one main purpose, to speed up the effective marketing to, and penetration of, our initial target market, over the initial 24 months of the business. Specifically we have identified the following:

• 4 key events throughout the next 12 months that we intend to have a high profile presence at, in order to promote awareness of the brand amongst vegetarians and vegans These events are:

- Vevolution – the leading one day conference for the vegan community, attracting over 400 vegan activists, entrepreneurs and networkers.

• 4 key magazines/websites, that we will combine advertising with editorial, in order reach consumers, but also independent health food retail outlets.

Investors may be interested to know therefore that there investment will be spent/invested in other vegan/vegan friendly businesses. Our target market can be split into three key areas;

1) Vegans/vegetarians and "flexitarians", that are looking for a healthy, ethical “fast food” alternative, to keep in their freezers as a convenient and health meal.

2) Ethically aware, health conscious or allergen conscious consumers, who aren’t vegetarian or vegan but are “conscious consumers”. These two target markets are planned to be reached both directly through a home delivery service (only available in selected locations as part of the early development of the company), and through retail outlets such as specialist health food stores and then the more mainstream supermarkets.

3) Restaurants/caterers, looking to provide an easy to produce vegan option, ie sell vegan pizzas on their menus. We aim to reach these catering establishments through frozen good wholesalers/distributors. The market we are developing our product range for is an expanding one on many fronts:

1) Veganism and vegetarianism has grown by 360% in the last 10 years in the UK and 1.14m UK adults now follow a vegetarian or vegan diet, with 35% now “flexitarian”, ie moving between a vegetarian and non-vegetarian diet.

2) There is growing awareness of how our diets impact on the planet, with the World Health Organisation calling for people to eat less meat and dairy in order to reduce the environmental impact on our planet.

3) More and more people want to eat fast AND ethically, including gluten and lactose free and almost all households rate "healthy foods" as being the most important of their food buying considerations, with 80 per cent of people rating it as the most important factor affecting their buying decisions.

4) 1 in 35 UK households now choose to buy non-diary, plant-based products, and 15% of the UK population are thought to be lactose intolerant. 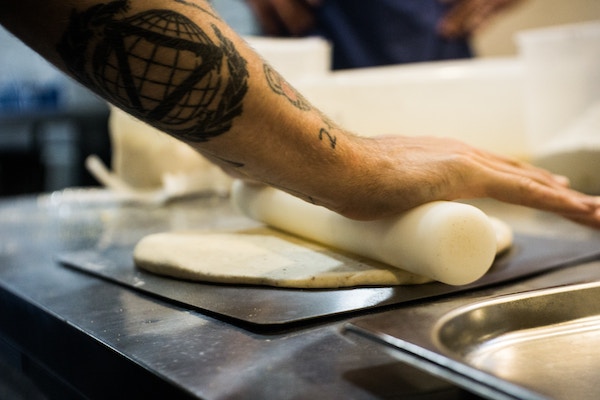 As well as individuals wishing to purchase a healthier, more ethical product, it is important that we understand how most people buy their vegetarian/vegan food.
We will have two main distribution routes to market:

1) Specialist health food stores – there are approximately 1000 of these in the UK, and this number includes the only two “chains”, Holland and Barratt, who have 725 stores, and Wholefoods who have 9 stores in the UK.

2) Mainstream supermarkets – including medium sized multiples such as the Co-op, and the big seven such as Tesco, Waitrose, Aldi etc

Our aim is to get our produce range into both of these markets.

We have a 7 stage plan to reach our market.

1) We develop the pizza range and brand (behind closed doors – kitchen doors) and add our existing redi-meal range to this new brand.

2) We run some taster nights in our home city of Norwich for local vegans, so they can taste the pizzas, give us feedback and learn about how they can become Veganistas!

3) We blitz the social media channels with our new product, ready for our national launch at the national networking conference Vevolution on November 5th 2016.

4) We launch “nationally” at Vevolution, to over 400 vegan delegates, with plenty of pizzas and info about the “Veginestment opportunity”!

5) We start distributing locally in Norwich and Brighton, both direct - through home delivery and through local health/wholefood stores.

6) Our aim is to “go national” distribution wise, to both specialist health food shops and supermarkets, with a big launch at Vegfest London, Brighton and Bristol next year – 2017. Interestingly Tesco recently reported that their chilled vegetarian good range had enjoyed increased sales of 20% A few companies produce organic pizzas and/or gluten free pizzas, but as far as we know there are only one or two frozen vegan pizzas currently available from retail outlets.

V-bites produce a small 7 inch frozen pizza in two varieties. It is available direct from them or is stocked in Holland and Barrett and some other health food outlets.

Amy’s, an American company, produce a range of vegan pizzas which are stocked in a limited number of specialist outlets, mainly in London.

We believe that we can produce a product that is superior to both these brands, and has a much higher profile in the vegan/veggie community, and a stronger brand positioning and loyalty, partly because our company will be owned by the core community it serves. To access the One Planet Pizza team biographies, including current ownership

To see the latest updates from One Planet Pizza

To ask questions directly to the One Planet Pizza team