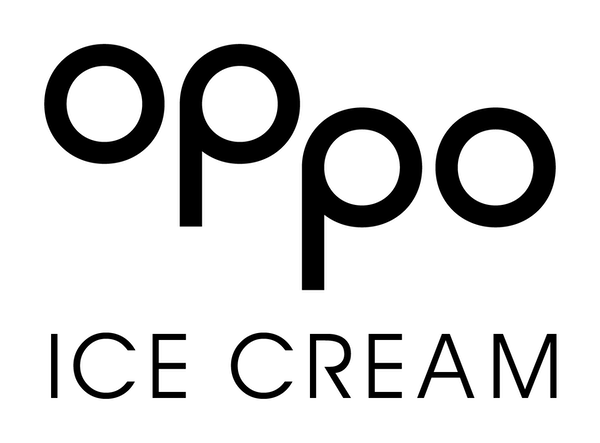 We’ve replaced cream and sugar with virgin coconut oil and stevia leaf (sweet, natural, no calories), and boosted each flavour with delicious super-foods to make an indulgent, premium ice cream.

The idea was born during a record breaking expedition brothers Harry and Charlie did in Brazil - travelling 1000 km along the coast using kites. They ran out of supplies so started eating coconuts and açaí berries. This sparked a love for using natural ingredients to make the most indulgent foods healthy.

Oppo is very low in sugar, and contains fewer calories than an apple per portion (two scoops). Super-premium ingredients combined with a complex manufacturing process make for an ice cream that is both indulgent and healthy. 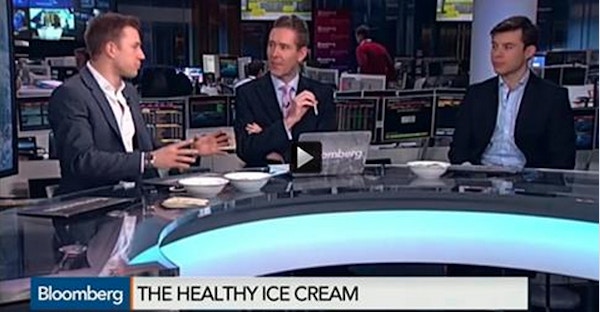 Oppo lets you give in to your cravings while staying healthy. You don’t have to sacrifice your six-pack for ice cream, or your ice cream for a six pack. And you can treat your children with something that replaces sugar with superfoods.

We all choose between health and indulgence when shopping for dessert. You deserve to indulge, but do you allow yourself to? Oppo makes that compromise a thing of the past, and taps into the trend for low sugar, healthy indulgence in a big way.

We have been told that even if we had millions to invest into developing a healthy product, getting the flavour right would be impossible. .Sometimes not knowing the rules makes them easier to break.

The product was created using grants from the Government and from Santander. Charlie's University (York) also helped, together with some seed funds from family. We were lucky to receive advice from industry professionals such as Gary Martin (who worked on the Haagan Dazs re-brand) and Mark Escolme (MD of Gu Puds).

Ice cream in the UK is just the start. We have already been approached for export, and are investigating other indulgent categories that are ripe for innovation. 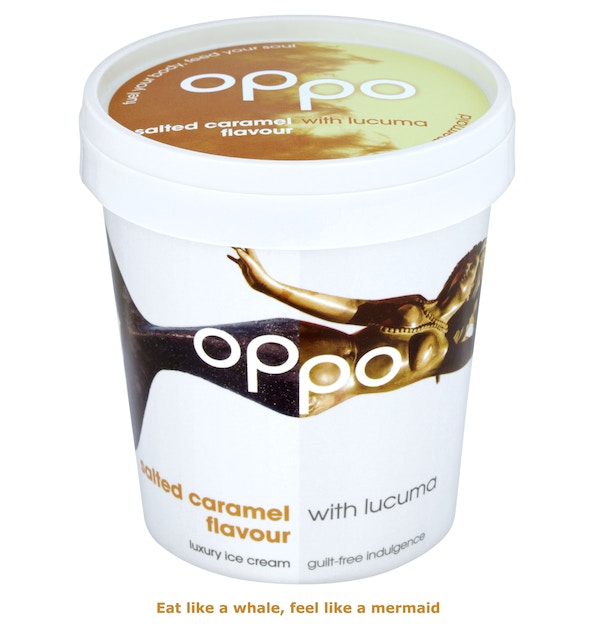 1. We have created a healthy ice cream that tastes like traditional luxury ice cream with no compromise on health or indulgence.
2. We have built an incredible team of industry experts.
3. We created the brand with Landor Associates, a renowned design agency, with an estimated £200k worth of agency work for no capital outlay. Instead, the company will pay Landor 10% of distributable profits until the company's financial year ending March 2017. The brand has already won a Pentaward for innovative design.
4. Oppo won Gold for most innovative product of 2014 at Lunch show.
5. We launched straight into both Waitrose and Ocado. We believe this is unprecedented for a start-up creating an entirely new sub-category.
6. We have raised over £110,000 so far through grants and private investment pre-Seedrs.
7. We've been interviewed on Bloomberg TV - check it out here http://www.bloomberg.com/video/oppo-ice-cream-h... 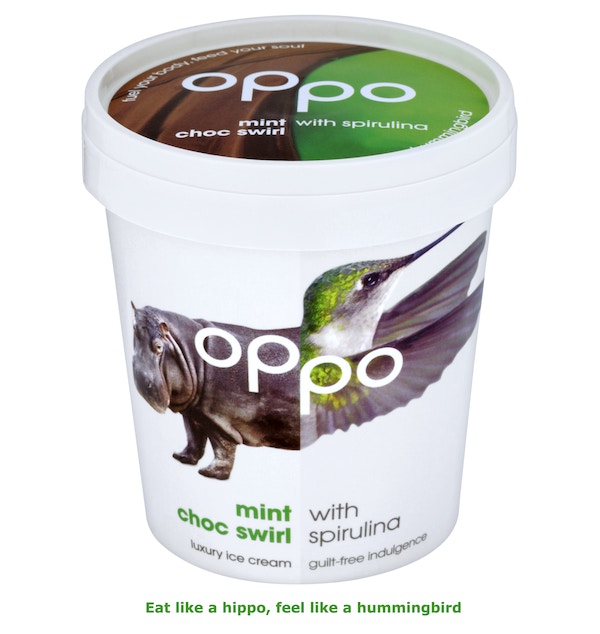 Charlie created the Oppo recipes so we own them in their entirety. We use a British factory to manufacture Oppo ice cream, and Charlie oversees production.

We use various distributors to store and distribute the product to retailers, and Oppo sells and markets the ice cream and brand nationwide. 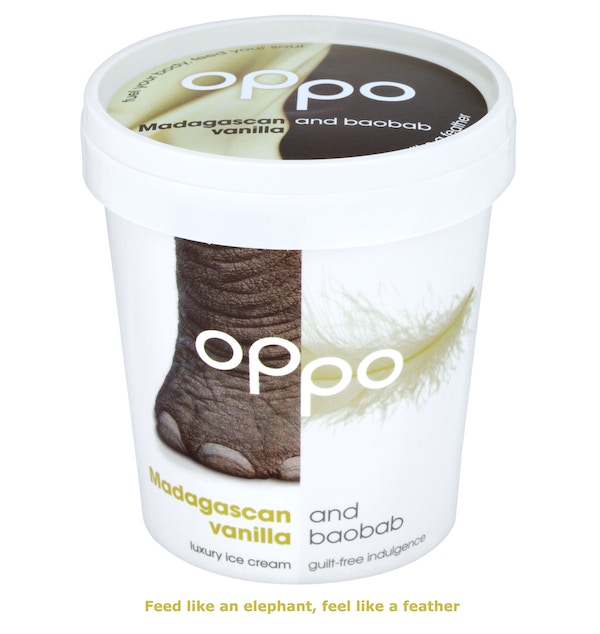 The investment will be used in four key areas: 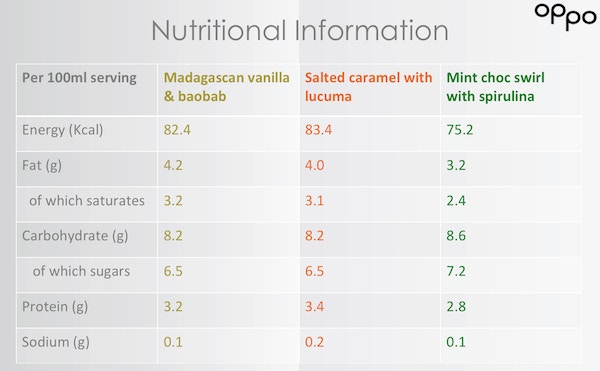 An increasingly health conscious affluent urban population don’t want to compromise on nutrition or taste. When they want a frozen treat, the nearest thing to ice cream is frozen yoghurt. But that just doesn’t taste as good – and usually contains added sugar.

Our core consumer is a 25-35 year old professional female. In ACORN terms she is part of the Highly Affluent, Wealth Achievers and Urban Prosperity groups, and in behavioural profile terms she is both health conscious and a confident cook. She goes to the gym or does yoga, pilates, tennis, netball, running or cycling several times a week. Together with her partner and children, she has a bit of a weakness for ice cream, but she worries about the sugar and calories so tends to stick to yoghurt. Oppo looks amazing because it offers the indulgence of luxury ice cream but has less than half the sugar of one of her kid’s smoothies!

Ice cream is competitive and dominated by big players such as Unilever and Nestle. The premium category is up 5% in value since October 2013, and is worth £275m.

At the same time, consumer interest in health has soared - health now drives twice the number of shopper consumption decisions across the major grocers now than it did 15 years ago.

Frozen yoghurt brands and low fat desserts have made some inroads into this expanding ‘healthy indulgence’ market, despite the fact that they often contain high levels of sugar, while the ice cream category has largely ignored the growing tranche of consumers who are concerned with health.

We aim to make ice cream relevant again and back into growth - which is why buyers like Oppo.

Oppo is the best of both worlds. With just 80 kcals per 100ml against traditional ice cream which has over three times this amount - Oppo gives retailers a way to reach this growing number of consumers. Oppo is now listed in 117 Waitrose stores and Ocado.com. We are working hard to increase the listings both in Waitrose and other outlets in 2015.

Here’s how we plan to drive rate of sale in these retail outlets.

1. Creating awareness and talkability to drive footfall is powered by PR, Social Media activity, and events. We have a PR agency who are working on product placement and business profiling with national news, food and lifestyle consumer print and digital publications. We are running an influencer seeding program for low cost celebrity endorsement of Oppo (with connections with several international Rugby players), are supplying Oppo at several media festivities in the Christmas party season, and have an ongoing content calendar.

2. Getting consumers to experience Oppo is facilitated by events and sampling using our experiential agency - with a presence at shows including Lunch! (where we won Gold in the Innovation Challenge), Food Matters Live, and intend to attend further major food and sporting events in the future. We are beginning a programme of sampling at office complexes in London and intend to start ‘guerrilla’ sampling outdoors from March 2015 onwards in key footfall locations such as Borough and Spitalfields markets.

3. Encouraging first purchase - is driven via point of sale sampling and price promotion.

For this Oppo won the Gold Innovation Award at Lunch! 2014, and a Silver Penta award for branding that is as striking as the product is innovative.

Oppo has launched straight into 117 Waitrose stores and Ocado.com - a rare feat for a new food brand - and we are poised for fast growth in 2015 with our product expected to be stocked in multiple retail outlets.

Frozen yoghurt has stormed the market in the last 6 years, and ice cream has taken a hit. But we have found that the majority of people who purchase frozen yoghurt actually prefer ice cream. They only buy frozen yoghurt as a permissible indulgence - despite the fact that it’s generally laden with sugar and isn’t actively healthy. Oppo is offering the indulgent factor of ice cream combined with a nutrition profile that far surpasses frozen yoghurt. 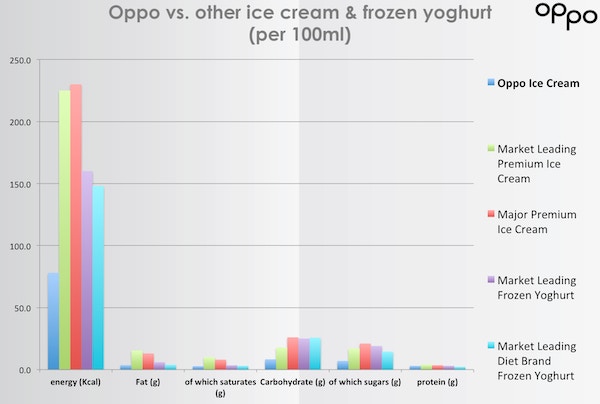