Please note that Riversimple has a different corporate and governance structure. Investors are encouraged to read the explanatory documents attached to the campaign and should note that shareholder protections for this investment will differ from those usually implemented. 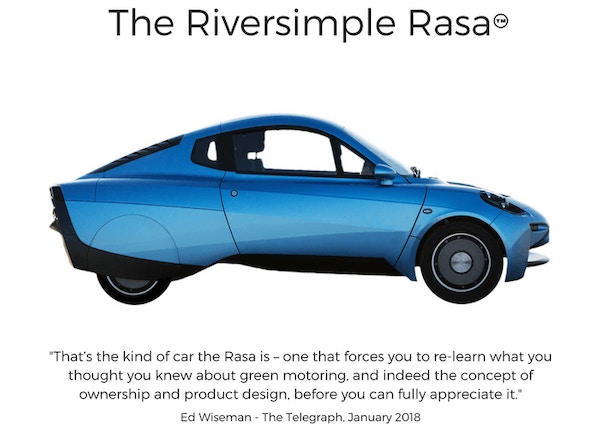 This is an opportunity to have a stake in a car manufacturer designed from a clean slate to be sustainable – financially, socially AND environmentally. We are developing hydrogen cars and the business model to bring them to market at an affordable price. We may be the only car manufacturer who hopes never to sell a car, designing all our vehicles to offer to customers on an all-inclusive service basis.

The Riversimple Rasa is a neat 2 seater – designed to be clean, energy-efficient, safe and fun to drive.

We have a grant of €2M from the EU towards a 12 month test of 20 Rasa cars in Monmouthshire. We are calling it a Beta test because we plan to actively be involving triallists in refining the vehicle and the service proposition.

Our first crowd round in early 2017 funded important development of software and telemetry as well as hardware. We are now crowdfunding to raise funds to match the grant and build the first 10 Beta cars. Rasa is short for Tabula Rasa, Latin for 'clean slate'. Air quality is acknowledged to be a massive and urgent challenge, and we believe the Rasa is best in class. It emits nothing but pure water vapour, no NOx. Thanks to its low weight, skinny tyres and highly regenerative braking, the Rasa has been designed to minimise the particulates from our tyres and brakes.

We intend to make a clean car practical and accessible to all those who would like to replace their diesel and petrol cars but don’t see how a battery electric car can work for them.

Hydrogen fuel cell cars will have an increasingly significant role to play in the UK as we work towards replacing diesel and petrol cars by 2040. We are also pioneering a service business model wth the aim of making efficiency profitable without asking the customer to pay a premium for it. With a team of ex-F1 and aerospace engineers, we have spent over 15 years developing the technology and the business model. Our strategy turns the traditional business model on its head. We are looking to make efficiency rather than obsolescence profitable.

We will be offering cars as an all-inclusive service, much like a mobile phone. As a customer, you take a car for 1-3 years and pay a fixed monthly fee with a mileage rate and that covers everything – when you fill up with fuel, the bill comes to us. When you bring it back, we supply it to a second customer, third, fourth and so on – without burdening them with the risks and unknowns usually associated with taking up new technology, eg insurance, maintenance and depreciation.

As our income comes from the cumulative number of vehicles in service rather than the number ‘sold’ every year, we believe that our revenue will be much more resilient in economic downturns. We also expect to ‘break even’ at much lower numbers of vehicles than the current industry because the tooling cost for carbon fibre structures is orders of magnitude lower than for steel-bodied cars. 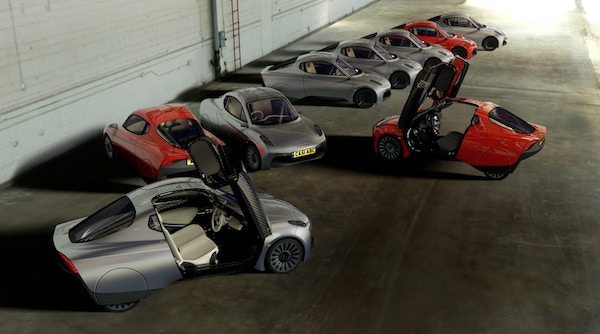 The first crowdfund we raised in 2017 was focused on preparing the technology for Beta cars. Since then, the prototype has undergone further design development; we intend to include new in-wheel motors and brakes, and most significantly, safety-critical software. We are now looking to build the first 10 Beta cars to place with volunteer Beta testers in Monmouthshire. We will be building and releasing them in batches with constant improvements in features and software over the 12 month trial.

Of the nearly 900 people who have offered to ‘Beta test’ the Rasa, at least 240 are based within 30 miles of the refuelling point that we are installing in central Abergavenny. The selection process for Beta testers has already begun. The Rasa is an everyday vehicle for everyday people. We believe it will make an ideal second car, for commuting or popping into town. 300 miles is a good week’s worth of fuel for most people, so the Rasa is convenient to refuel if you have occasion to come into town once a week or so. Riversimple’s next vehicle, which we intend to launch shortly after the Rasa in 2021, will be a light commercial van, designed for last mile delivery. There are over 34 million cars on the road in the UK. This enormous market is divided into new car buyers, who change their cars every 2-3 years, and second hand car buyers, who tend to keep their cars for longer and replace them on a more individual basis. Over 8 million second hand cars changed hands last year. We believe our sale of service rather than cars has the potential to appeal to both the new and secondhand market:

- cutting edge technology at an accessible cost of ownership for the new car buyer.
- guaranteed reliability and reassurance of ‘good as new’ for the second hand owner.

We are starting in a niche with a two seater designed primarily for local use, but we believe that niche offers substantial market opportunity for an initially low volume manufacturer. Our target volume is 5,000 cars per annum, which we estimate to be the optimal throughput of one set of carbon fibre tooling. 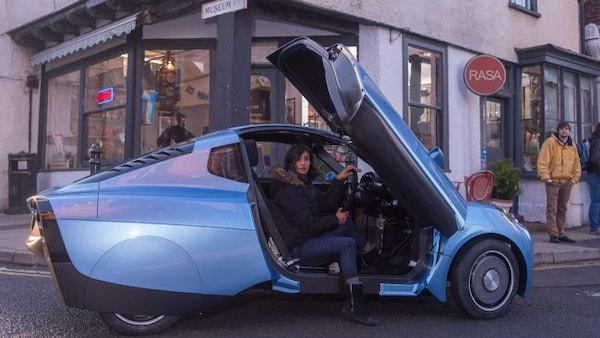 Mobility as a service potential:
- Less than a quarter of new car buyers in the UK actually buy their cars; 82% of new cars in Britain were acquired under PCP (Personal Contract Purchase).
- It’s not about owning cars. The number of members using car sharing services globally is projected to increase from 6 million to 18 million by 2025. We intend to bring the Rasa to market in 2020/1 region by region, in line with the roll-out of hydrogen infrastructure. We are in active conversation with County and City Councils about launch locations. Such a launch strategy calls predominantly for local marketing, which will comprise a mixture of active roadshows, socialising the Rasa and inviting test drives, and online fulfilment. We will automatically contact all investors to invite them to register on the priority waiting list for a Rasa.

The company is called Riversimple Movement, dedicated to delivering sustainable mobility and the circular economy without sacrificing the pleasure of independent driving and it is a movement that has attracted significant media attention already.

We have been approached by mainstream TV shows interested in covering the Beta test and seeing how the community embraces 20 hydrogen cars over the 12 months.

There is no direct competitor for the Rasa to our knowledge. We intend to replace whatever diesel and petrol cars customers happen to be driving for commuting and going about their everyday business.

The most notable hydrogen fuel cell car on the roads in the UK is the Toyota Mirai but as a 5 door, SUV-sized vehicle costing £66,000 it’s not in the Rasa’s competitive set. The Rasa is compared a lot to the Tesla, but it is a much smaller, lighter, more affordable vehicle with lower power, designed to be more efficient. We see the only parallel with Tesla as the fact that we are kicking off with a sexy looking roadster.

We intend to match the current cost of ownership of a mid-sized diesel hatchback while offering a hassle-free, all inclusive service, pre-empting maintenance requirements, for instance, and giving you the satisfaction of filling up with fuel and simply driving away – no payment. To access the Riversimple team biographies, including current ownership