Splendy has created a new genre of entertainment combining movies & games. Our next game launches July 16

Please note that whilst the campaign is labelled as EIS eligible the Company has £50,000 remaining of its SEIS limit. We will, therefore, be looking to seek SEIS relief on the first £50,000 invested into the campaign, with the balance being EIS eligible. Any tax relief is dependent on personal circumstances and may be subject to change in the future. 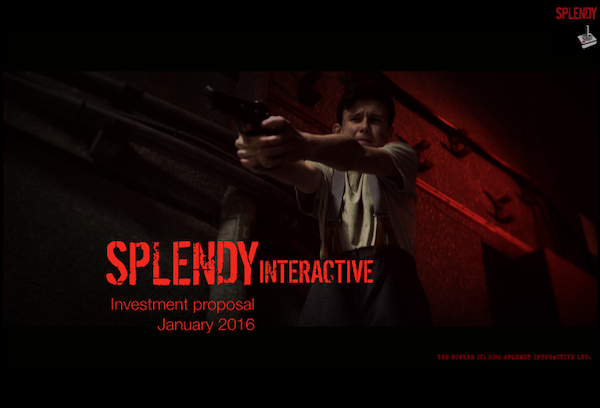 Splendy is successfully leading a new genre of entertainment combining gaming with movies.

Splendy's innovation in gaming was recognised by the judges at Facebook's Big App Fund, who awarded them £100k funding via Seedrs in January 2015. 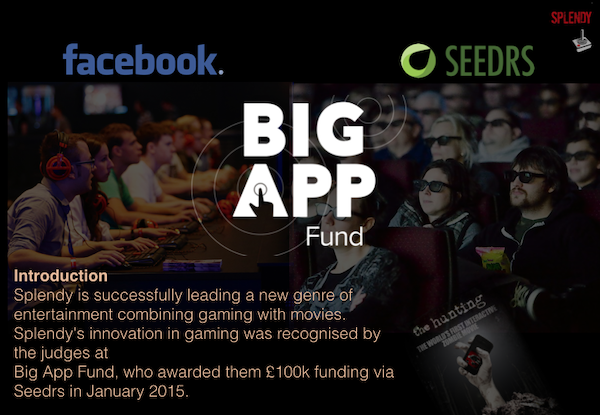 Since then, Splendy has completed the filming of their new 2016 release, "The BUNKER" (starring Adam Brown from The Hobbit Trilogy & Pirates of The Caribbean Dead Man's Chest). Splendy's 2017 release, "Camera 6" has a full treatment in pre-production right now.

Splendy has signed 3 distribution deals for "The BUNKER" with games publishers. A release date of Jul '16 has been stated for XboxOne. The IOS & Android release date is Nov '16.

We are aiming to complete by 31st Mar '16. We believe that this raise will provide sufficient finance until revenues flow from The BUNKER.

Splendy's vision is to take what we love most about gaming and mixing it with the visceral, immersion and storytelling of films.

Our ambition is to bring this new genre of entertainment to players by partnering with 3 publishers, Greenman Loaded (the Publishing arm of Greenman Gaming), Wales Interactive and Channel 4's All4 Games via major entertainment platforms such as Xbox One.

2. Won two years of mentoring with Worth Capital.

3. Sold The Bunker game concept to 3 games publishers (including Channel 4's All4 Games unit, Wales Interactive - a BAFTA Award winning studio and Greenman Loaded -The publishing arm of Greenman Gamings 2nd biggest shop window for games online - (like an App Store) and giving us the go ahead to launch it.

4. Successfully funded and filmed "The BUNKER" with £150k of private investment into the SPV called The Bunker Productions Ltd, which Splendy owns 53% of.

5. Lured Michael Richards from Last Chance films to be our Producer and with him comes a whole network of production talent including what we believe to be some of the best producers, film editors and crew the UK has to offer.

Splendy the parent company is the creative hub, generating concepts and ideas with one eye on new technologies (virtual reality and augmented reality in particular), and the other on what the market wants. Then we source the right type of funding from finance houses, investors and distributors. All while using the current UK Video Games Tax Relief. 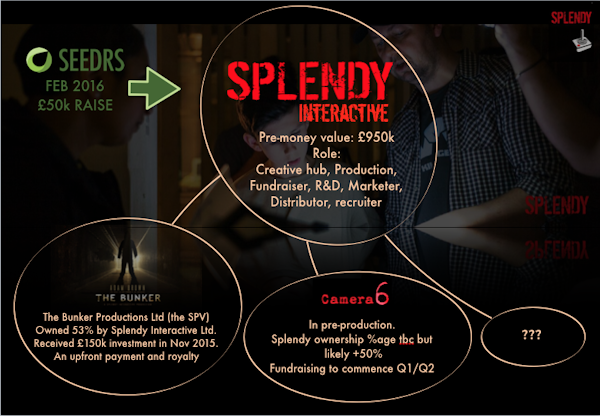 Splendy finances each new release using 3rd party investment in to Special Purpose Vehicles e.g with the BUNKER, Splendy owns 53%, and receives an upfront payment covering the costs of our people time and admin for the production and a royalty post-release paid to the SPV and then in dividends to the parent company Splendy.

We expect that royalties will start to flow from The Bunker in August 2016. Spendly has negotiated that the marketing is covered by the 3 distributors.

1. Equipment - Alienware desktop PC (high end gaming PC). New and bigger monitors, upgrading our existing Computer hardware with more power, better graphics cards etc.
2. New production software - Movie Magic
3. Wages and transport expenses.
4. R&D - We need to finalise a location for the filming, employ a specialist games writer (Ian Thomas who worked with us on "The BUNKER") to finish Camera 6 scripting and create a gameplay trailer to help source finance and distribution deals. We feel this method worked really well with "The BUNKER".
5. Exhibiting at events such as London Games Festival, E3, Gamescom and PAX in order to build and nuture relationships with consumers, distributors and financiers.

Our games are targeted at gamers from teens through to adults, globally. The distribution deals we have signed for "The BUNKER" give us pan-territory reach.

There are no global statistics for gaming, but for example there are 155 million Americans who play video games.
(ESA-2015 SALES, DEMOGRAPHIC AND USAGE DATA).

To us, this shows that the market is ready for deeper more mature stories like ours. Our market, although gaming, can more precisely be seen as the intersection between movies and games. There are subtleties between the Platforms, the expectations from a PC gamer compared with an iPad user are very different. This is why we have deliberately sourced 3 different publishers who are specialists in thier platforms. They all have close relationships with thier existing customer base and understand their customer needs better then any else could.

Our 3 distributors are committing £250k of cash and promotional support to the launch of "The BUNKER". This support will consist of the following:

We believe that there is genuinely nothing like Splendy's offer in the marketplace.

We have priced The Bunker at £14.99 which puts it in the same price bracket as movies and very competitive in the games market.
Splendy is very quickly building the right team creatives to drive the future innovations, at the same time partnering with big brands such as Channel 4 and Greenman Gaming.

The business model of using SPV's allow Splendy creative control and room for collaboration in an industry renowned for it's cross collaboration. To access the Splendy Interactive team biographies, including current ownership