Profile
Web development reinvented: skip the code and build Rome in a day. 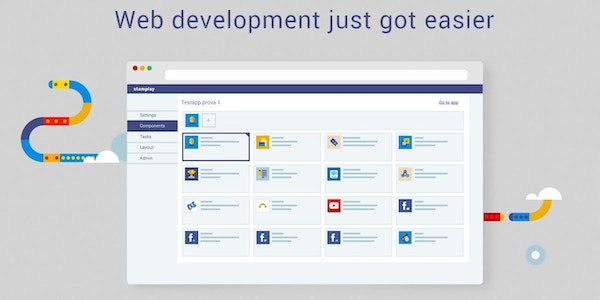 Creating web applications is still expensive and wastes a lot of time because it relies on many menial tasks and matter of fact developers can waste 50%+ of their time reinventing the wheel.

With Stamplay developers only need to focus on the client side of the app. Our platform streamlines the development of web applications reducing the work of days to a matter of minutes. Stamplay is changing how software is built, transforming it into a visual experience. As A16Z (Andreessen-Horowitz, one of the top Silicon Valley based VC firm) recently commented, software development is becoming easier like "snapping pieces together like Lego" It will one day be funny that building Facebook required so much hard work when building applications becomes like snapping pieces together as if they are building blocks.

Software is not only eating the world, it is eating software development and we are pursuing this big vision. We can democratize web development.

Today, the majority of mobile and HTML5 apps are designed by splitting the development work between the device used by the user (the client side) and a remote server (backend side). Building the server side of a new app is, in the vast majority of cases, not reinventing the wheel and involves fighting against well known problems. Meanwhile the client side is what really makes an app unique and usually needs to be completely bespoke. Maintaining and scaling the server side while orchestrating the other services connected to it (Mailchimp, Facebook, Stripe, Twilio etc) with their ever changing API can also be a never ending chore.

Stamplay brings together powerful components and API's from external services in a way that developers only need to define rules like “When a user signs up with Facebook, send him a welcome email and add him on my newsletter list”. Super easy. Apps can be, almost, instantly up and running, and our platform takes care of everything so that developers only need to focus on what really makes an app unique, the client side.

With Stamplay, we estimate developers could build 90% of their app in 10% of the time, we like to say that we let them build Rome in a day. 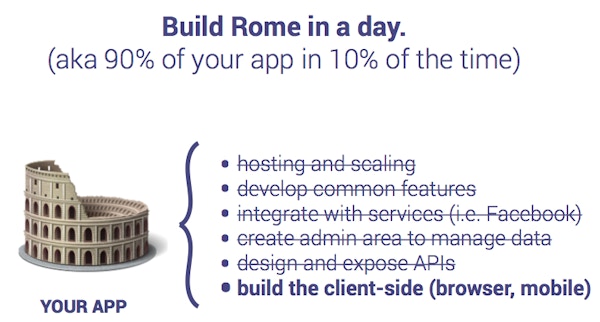 - We believe we have validated the idea and built a cutting edge piece of technology.
- Validated user acquisition process, 13,400 signed up web makers to date.
- Award-winning startup at Hy!Demo, 3rd all time most voted on Product Hunt.
- Part of the Seedcamp portfolio.
- Already provide integration with the coolest service around (Mailchimp, Survey Monkey, Intercom.io, Pusher, Facebook Ads).
- Signed an agreement with Razorfish Healthware that will leverage our technology to build products for its customers in the e-health industry
- We have 19 modules available on our platform, adding them on a regular basis.
- Team of 4 developers + 2 founders.
- Featured on The Next Web.
- Endorsed by a former Co-Founder of Joomla (the first platform that empowered developers in creating great websites with no effort) that is ready to join the team.

The revenue model has two streams:

1) On the self provisioning side which is a freemium plan. Developers pay a monthly recurring fee for every active app above a certain threshold of usage.

2) On an enterprise level we provide a dedicated instance of the platform hosted in a private cloud with higher SLAs. Kickoff price starts from €30k with €15k of annual recurring revenue.

A third revenue stream is upcoming. We designed Stamplay to be an open environment where apps created by developers on Stamplay can be sold as ready-to-go recipes creating a network effect and lowering the barrier of entrance to more code-shy people. By October we have a planned release of the Stamplay store, a catalogue of apps created by our users for our users.

Both founders have previously run companies and have great experience in building web products.

We are targeting web developers these users are said to include an average mix of startuppers, freelancers and developers from web development agencies. Developers using our platform can be segmented as follow:

However, our vision doesn't end here. We want to democratise programming. As our platform further develops, non-coders would potentially be able to use Stamplay to build web apps as well. Just like CMS systems such as Wordpress empowered content creators to publish material without the need of programming, we believe this is about to happen again in the web development world. It may sound crazy but think back to the early days when people were programming computers by taking full control of the motherboard. Who would have thought that someone could build software just relying on a mouse or the screen without having to worry about each component of the chip anymore? But it happened. Or think again when MS-DOS was the way to send commands to your computer before Microsoft Windows.

This is incredibly powerful and the gains of such change will be unbelievable. Opening application or startup creation to different people with few or no technical background will empower them to launch their ideas unleashing thousands of new startups that can now be built because this friction is gone.

As Chris Dixon (partner at Silicon Valley based VC firm, Andreessen-Horowitz) said, software is not only eating the world, it's eating software development.

We see web development shifting more and more towards a cloud/client architecture along with a substantial grow rate of web developers and need for new web applications. Here are the most relevant market trends for our platform.

- Rise of Javascript and client-side web apps.
- Increasing adoption of backend tooling is creating more frontend and client side developers.
- Mobile web apps which behave and perform like native apps.
- Ever growing need of web applications to be built. Web development is often the most sought commodity on freelance websites.
- Freelancers will outpace full time workers by 2020 and they aim to maximise their profits by reducing time and costs.

Today it is estimated to be around £4bn, 48% being made up of freelancers or independent software vendors.

We reach developers via advertising on Facebook that already tested to be very effective (Visitors/signup ~40% conversion rate. £0.77 CPA). To this we are adding:

- Content marketing is the best way to both acquire users and activate them. Our tutorials about how to build well known services like JustEat, HackerNews or stack overflow received huge attention driving about 10k views and hundreds of new signups.

- Deploy a developer outreach program by building Evangelist network and Developer reward programs to boost traffic and usage of our platform. The more developers that adopt and talk about the platform the more that come.

- Community management: sustaining user engagement is crucial to build a community that will power the ecosystem around the platform. This goes through webinars, meetups and hackathons. Building a community around a product can also be one of the cheapest ways to create momentum for it. A community is much more than a one-time marketing campaign, and can help you throughout your company’s life cycle if you grow it right.

There are several tools in the development industry with similar value propositions but they all address very specific needs for very tech-savvy people. We allow developers of all skill levels to focus on what’s really unique about their app and stop worrying about server-side code thanks to our service made of "lego bricks" that can be connected with the ease of a consumer product. Front end developers can still create a unique user experience working with their favorite tools or frameworks - we do not change their habits.

Stamplay is the only platform we are aware of that manages hosting, data, server side logic, interoperability with other systems and third party API integrations requiring no effort for the developer. Last but not least, we believe Stamplay is the only platform designed to be an open environment where third-party developers can build on its foundations, which will be key to efficiently scale the platform. As a platform, Stamplay is an inherently adaptive system. We don’t have to keep up with every new feature, tactic, and technology out in the broader marketing world — which is evolving at a blinding pace. We can let our ecosystems of third-party developers address the vast majority of these innovations, competing with each other in a true evolutionary fashion.

To access the Stamplay team biographies, including current ownership