The Pajama Game The Musical will be launching at The Shaftesbury Theatre in the heart of the West End from 2nd May 2014 for a twenty week run. This follows a successful run at the Minerva Theatre in Chichester last year.

The pedigree of The Pajama Game is impeccable - its collaborators were all, or would become, the aristocracy of Broadway: George Abbott, Richard Adler, Jerome Robbins, Hal Prince and Bob Fosse. The original production of their hit Broadway musical won the Tony® Award for Best Musical and would later pick up another Tony® for Best Revival of a Musical at its 2006 Broadway revival.

Set in the American Midwest in the 1950s, love is in the air at the Sleep-Tite Pajama Factory as handsome new Superintendent Sid Sorokin falls head-over-heels for firebrand union rep Babe Williams. But when the employees are refused a seven-and-a-half cents an hour raise, sparks fly and the couple find themselves deliciously at odds. Will love, eventually, conquer all?

We are very excited to offer the following additional rewards to our investors: 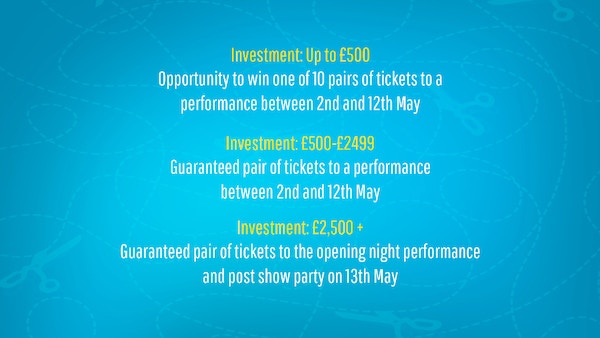 With fantastic reviews and a well structured powerful marketing campaign close to launching we think The Pajama Game has an excellent chance of being incredibly successful in the West End this year. We think the reviews so far speak for themselves. The Pajama Game had a critically acclaimed and sold out run at the Minerva Theatre, Chichester where it picked up a host of five and four star reviews from The Guardian, The Evening Standard, The Mail on Sunday, The Sunday Express, The Times, The Daily Telegraph, The Daily Express and The Daily Mail.

“A glorious tide of melody! This 1954 show, with words and music by Richard Adler and Jerry Ross, takes you back to the heyday of the American book-musical and gets a production from Richard Eyre that, for sheer finesse, evokes memories of his National Theatre Guys and Dolls.”

The Pajama Game is being run by established theatre producers whose recent credits include Million Dollar Quartet (Noel Coward), How to succeed in Business Without Really Trying Starring Daniel Radcliffe (Al Hirschfeld), The Ladykillers (Vaudeville), A Doll’s House (Duke of York’s), Sweeney Todd (Adelphi) and the upcoming UK and Ireland Tour of Shrek The Musical. 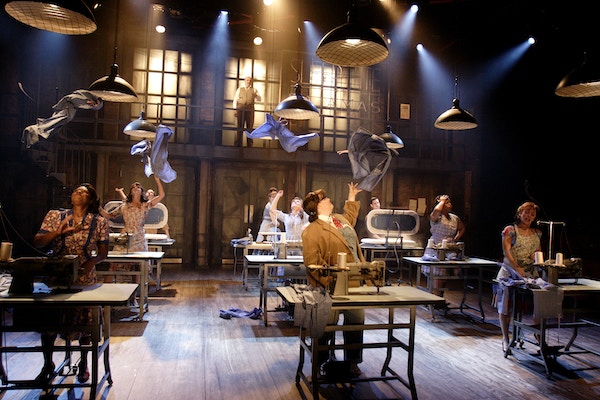 The Pajama Game The Musical will run at the Shaftesbury Theatre for a limited run for twenty weeks. The production is now on sale at http://www.thepajamagamethemusical.com/

The Shaftesbury Theatre has 1,338 seats and based on our calculations for The Pajama Game to fully recoup it needs to sell just a 46% capacity at the theatre over the twenty week running period.

The Pajama Game The Musical requires a capitalisation of £1.4 million (the "Production Costs") that is expected to cover all costs from inception to the start of the production in May 2014. The Pajama Game then has twenty running weeks with weekly running costs of approximately £135,000 per week.

As is common in theatre productions, investors will receive a share of the Remaining Net Profits (see below), and distributions will be made as soon as practicable after the 20 week run has been completed.

* The Weekly Operating Profit is the amount of box office receipts less the Running Costs.

* The Royalty Payments are paid out of a royalty pool, which is entitled to the following percentages of Weekly Operating Profit depending on the recoupment of Production Costs:

* The Chichester Festival Theatre is entitled to a 5% share of Net Profits after the Production Costs have been recouped. The money raised during this campaign will be used towards the £1.4 million Production Costs (from inception to Opening Night). These costs include production fees, rehearsal salaries, theatre expenses advertising & publicity, contingency and running reserve The Society of London Theatre’s 2013 Box Office figures, published 29th Jan 2014, show record ticket revenue and attendances. Overall attendances increased 4% to over 14.5 million people and gross sales of over £585million were up 11% compared to 2012. The increase in revenue can be largely attributed to an average 72.7% seat capacity across the West End’s 52 theatres. We have employed the following market leading companies to work on behalf of the production:

AKA for marketing & advertising http://www.akauk.com/
Jo Allen PR for all public relations http://joallanpr.co.uk/

£450,000 of the £1.4million capitalisation will be apportioned to the marketing of The Pajama Game up to the opening. The weekly marketing spend will then be £25,000 each week during the run. The Pajama Game is a well loved, classic Broadway musical revival. With an award-winning creative team of Sir Richard Eyre and Stephen Mear, the production has been crying out for a West End home since its critically acclaimed Chichester Festival Theatre run.