Supernatural thriller film, from the producers of Panic Button.

- Exciting, original ghost story that delivers on chills, twists and turns with a central character that the audience really cares about.

- The film is planned to be available to UK audiences on all platforms simultaneously, enabling a choice of where and when to watch it, at an affordable price. Original micro-budget feature film with huge horror genre market potential. The film has an exciting screenplay that has attracted cast of international value, delivered by a highly experienced team.

The story provides a different take on the haunted house / ghost story, by combining the angles of hidden secrets from Victorian Brighton, contained within a secret chamber of a Georgian mansion, and deeper still, within an antique Mutoscope device which offers clues to the truth behind the protagonists identity and lineage.

The Sleeping Room has the potential to make a striking and unique genre film with enough original elements to make it really stand out. The script delivers on chills and scares, whilst potentially appealing to a wider audience through its style and originality. The films universal appeal stems from the relatable and engaging story of an interesting character on a journey to discover the truth behind who she really is. The Sleeping Room completed principal photography on December 21st 2013, shooting for 16 days on location in Brighton; directed by John Shackleton and co-produced by Gareth I Davies.

The entire shoot ran smoothly and according to schedule, thanks to the hard work, dedication and commitment of our very talented cast and crew.

The project has now entered post production, and the producers are seeking completion funding to cover costs to deliver the film in time for the Cannes Film Market in May’14.

The post house BANG in Cardiff is handling both picture and sound, for the next four months, with triple Welsh BAFTA winning editor, John Gillanders at the helm.

Film4 Frightfest festival held at the prestigious Empire Cinema in Leicester Square, London, have pledged their support for the film and there will hopefully be much press and publicity activity forthcoming in 2014. 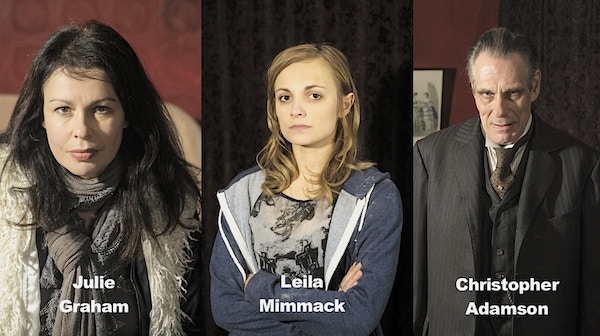 It is our intention to deliver an original feature film of the highest possible quality and commercial aspiration for the lowest possible price point, using only the very best available talent.

We intend to recoup production costs via international sales, and then take the film into profit from UK distribution, within the first year of release, by building an audience in advance and creating effective, targeted, cross-platform marketing campaigns, designed to ensure maximum audience reach for minimal cost.

Market price can be significantly inflated by good film festival exposure and reception. We would like to complete the film, and solicit sales companies and film festival directors for advice on the most appropriate path for our film to take, to ensure maximum ROI for all parties. The £10,000 investment will be used for post production and delivery costs.

We are seeking to build long lasting relationships with private investors to partake in future productions once this one has proved to be a financial success.

The appeal for original ghost stories is a timeless one. Take for example classic titles such as THE INNOCENTS and THE SHINING. There’s the phenomena’s of THE BLAIR WITCH PROJECT and the PARANORMAL ACTIVITY franchise. Recent box office successes include THE WOMAN IN BLACK and THE CONJURING, whilst currently INSIDIOUS 2 and PARANORMAL ACTIVITY: THE MARKED ONES continue to hold their own at the box office.

Clearly audiences have an insatiable appetite to have the hairs on the back of their neck raised, and to be scared witless! These films are predominantly good stories, told well with great performances, using music and sound effects achieve their dramatic beats - and not necessarily A-list movie stars, big budgets or lavish special effects.

When a film succeeds on that rudimentary level, people tell their friends and encourage them to go and see it. We believe that THE SLEEPING ROOM holds the potential to truly connect with audiences and carry a timeless appeal.

There is nobody better placed to sell a film than its creators. By retaining UK sales and distribution rights, and raising a P&A spend through a separate crowd-funding campaign, we will have both independence and a growing audience, ahead of the films release.

We will structure a targeted marketing campaign around our world premiere, utilizing social media, PR, viral video and bespoke press events, leading towards a ‘day and date’ UK release across all platforms; cinema, pay per view TV, DVD and video on demand / digital.

We are also investigating the business case to exploit the film’s story IP rights, across key digital platforms, and capitalise on the great potential to reach an audience who sit outside mainstream media channels.

For example, a mobile app which allows the audience to probe into the backstory of the main antagonist, and the world of Mutoscope filmmaking, with the opportunity for users to create ‘What the Butler Saw’ style home movies within an app for themselves, captured on a hand held device, and the end results shared on social media networks, to ultimately increase the awareness, and discoverability of the film.

THE SLEEPING ROOM is our second feature film release and so we have the benefit of experience on our side.

Every film is a unique offering to audiences and the truth is that nobody really knows what people will respond to. Traditionally the problem for low budget independent films is getting them seen. Sales companies and distributors are reluctant to gamble big money on a cinema release with an unproven product, and in most cases, nothing at all. So until a film is presented to a paying audience, how can we gauge its true potential? For an independent film to truly break out on the scale of notorious supernatural financial successes such as The Blair Witch Project and Paranormal Activity, studio backing is essential because this requires a huge P&A spend to position the film in multiplexes.

The only way to procure studio backing is by proving a phenomenal audience reaction to a film on your own, and some strong box office success. Financing our own small cinema release through crowd-funding, will provide THE SLEEPING ROOM with the opportunity to find out if the film can actually gain the necessary traction with paying audiences to break out. We believe that this film has the potential, and if successful, then it will certainly lead to an extended run and some newsworthy press.