The technological solution for crop monitoring. Save resources, prevent risks and maximize production.

To accomplish that, we deliver an integrated and scalable product based on Agroop Cooperation, an operational management app, and an easy-to-use IoT device called Stoock. This device measures crop data, such as air moisture and temperature, soil moisture and temperature, as well as solar radiation, and then sends it to the app. From this, our users can understand their crop’s water needs, know when the plants are at risk of developing plagues, diseases or fungi, create field records and receive operational recommendations from the agronomists who support them.

These agronomists/consultants - who can become Agroop prescribers - can also use Agroop Cooperation to centralize their customers’ information and provide a better and more assertive consultancy service.

By 2050, it is estimated that the global population will reach the stunning number of 9 billion inhabitants. That means the need for food will increase by 60%. 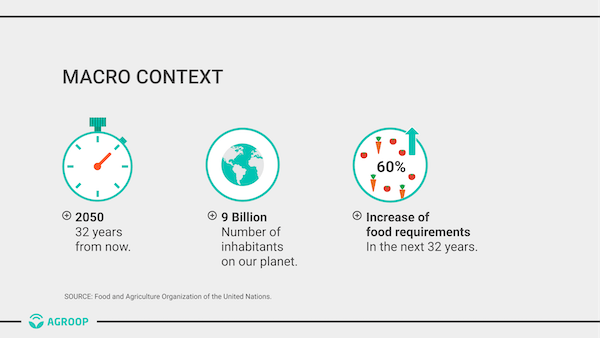 This situation and global warming are perhaps two of the biggest challenges we need to face. And for the farming industry, it’s a huge opportunity to step up and show once again that it can be part of the solution and not the problem.

This is an opportunity for farmers to show that they will not only be able to increase global agricultural output, keeping up with the demand, but also do it using less resources while reducing carbon emissions.

We believe that this is where new AgTech companies like Agroop can and should play a role. We have the responsibility to help agriculture players to centralize and analyze information, and convert it into decisions and actions supported by true and tangible knowledge.

In our first case study, this impact was very clear:
https://www.youtube.com/watch?v=bvZpwNeE-NM.

Early on, Agroop was recognized by Microsoft as one of the most promising startups – one among many entrepreneurship prizes the company won in Portugal. Outside its home country, Agroop was the recipient of an innovation grant from the EU’s Horizon 2020 (SME Instrument – Phase 1) and was also selected to be in one of the most prestigious acceleration programs in Europe, H-Farm.

In terms of investment, Agroop was the first Portuguese company to successfully complete three crowdfunding equity campaigns on Seedrs, reaching 257% overfunding in the last one and raising, in total, approximately € 700k from almost 500 investors of 25 different nationalities.

As for press, Agroop has been featured in all the major Portuguese TV networks, as well as in other high profile press media.

Internationally, the company was considered to be one of the "Top 50 High Potential Startups" by G-Startup Worldwide. More recently, Startus Insights included Agroop in its list of “Rising technologies & Startups”, and Challenge Advisory chose the company as one of the “8 AgTech companies to watch in 2018” - among others like Climate Corporation, which was acquired by Monsanto for just under $1 Billion.

Despite these achievements, what makes us really proud is the fact that we have fully launched our combined product in January 2018 and at this point we have more than 100 IoT devices spread around the world, a 381% revenue growth (from 2017 to 2018), and customers in 8 countries across 3 continents: Europe, America and Australia. 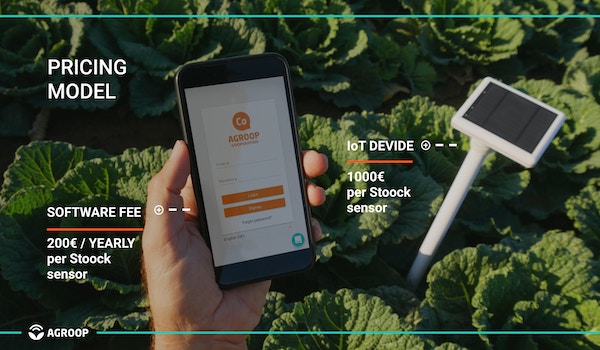 At the moment, Agroop has two main revenue streams:

STOOCK (HARDWARE):
We charge a one-time fee for each IoT device installed in the customer’s field.

AGROOP COOPERATION (SOFTWARE):
We charge a monthly or annual fee for the app’s usage. This fee varies according to the number of Stoock IoT devices installed in the customer’s field.

In the future, Agroop’s main goal, like other companies, is to monetize and reach the Big Data state, as well as implement Machine Learning and AI. However, at the moment we’re keeping our focus on delivering an intuitive and highly scalable tool that will work as an entering point into the market, allowing us to reach a large and global customer base.

From our perspective it appears the vast majority of AgTech companies have a tailor-made approach, which means that they’re trying to develop a very complete and personalized solution based on a very large and open range of sensors which in turn will lead to a much less scalable path. 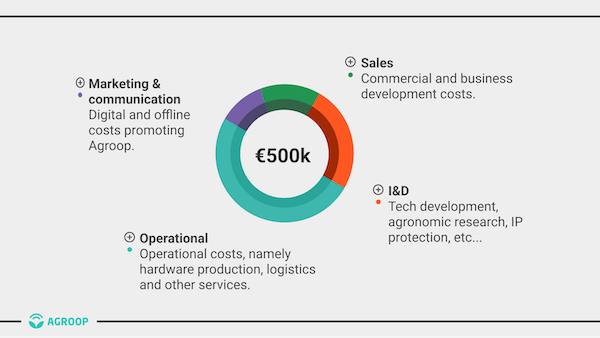 The past year (2018) has been the most special year for Agroop. It was the first time that we, as a team, were able to commercialise our solution and start validating our business model, our value proposition, and its scalability potential.

Now, it’s time to focus on our internationalisation – especially in two markets where we already have relationships and connections: Australia and, more recently, the US (specifically, California.)

A big part of the investment will be used precisely to support this scale-up plan and also to support our continued development process.

To access the Agroop team biographies, including current ownership