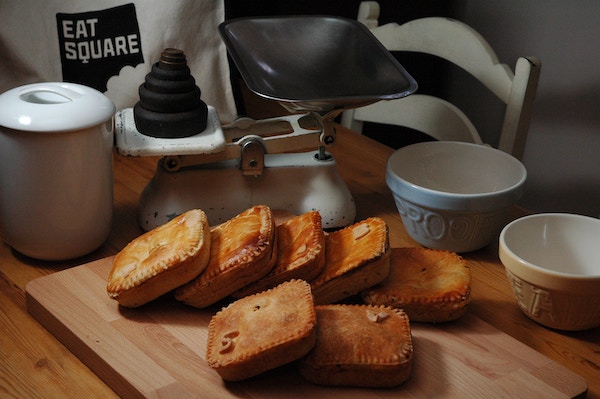 Eat Square is a pie company specialising in quality pies of individual portion size. Pies are made with free range local meats and ingredients from traditional recipes.

Eat Square was launched in 2014 by restauranteur Alex Joll who successfully crowd funded in early 2015 in order to move into a commercial kitchen. Alex then attracted financing at the end of 2015 from entrepreneur Alfie Best.

Eat Square's pies have won awards and are now listed with Co-Op, Budgens and Londis retailers. Pies are also available at local football grounds, tourist attractions and other similar venues and events, and at the beginning of 2016, after identifying it as a fast-growth food sector, Eat Square introduced a range of Gluten and Dairy Free pies, including vegan options. 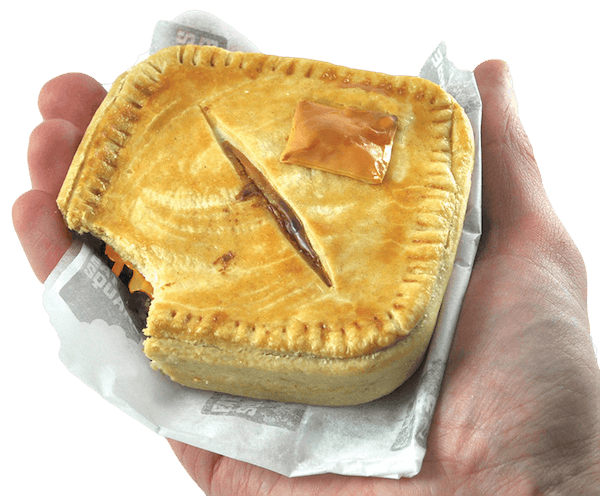 Eat Square is on a mission to offer the discerning pie eaters of the UK a better alternative.

The founder, Alex Joll, was taught to make pastry by his grandmother. People always told him he should sell his pies and one day in 2014 that's what he did.

At the first market Alex sold out. And at the next and next. Alex soon realised that people wanted a quality free-range pie and were willing to pay a little bit more for it. So he decided to found Eat Square.

Alex felt from his experience of pies made by some of the biggest producers in the country that the quality in the market isn't high enough. They make and sell millions of pies a year; but he felt that they just aren't that good. After success at markets Alex came to the view that a significant proportion of people would pay a little more for a lot more quality (just as they do with gourmet burgers like Byron). Awards: 2016 Taste of the West awards for Chicken and Leek Pie and Roast Vegetable Pie. Both pies were entered in standard pie category and won silver medals. A great achievement considering that they are both gluten and dairy free.

Events: Eat Square has catered private evens and parties as well as major public events. The largest of these was a battle civil war re-enactment weekend with over 5,000 people attendance.

Gluten Free: Since launch the gluten free and dairy free pie ranges have steadily increased in popularity. Eat Square has a loyal and increasing customer base in this fast growing market.

Sausage Rolls: Introduced in the 3rd quarter of 2016 Eat Square free range sausage rolls now make up a substantial part of our turnover. Selling for multiples of those by high street retailers they are packed with meat. This shows that some customers are willing to pay considerably more for a quality free range meat product.

New in 2017: January saw the introduction of our “Free Range Pasties”. They have proved very popular at the first markets of the year are attracting more interest than all our other products. We also plan to develop these further through the year. 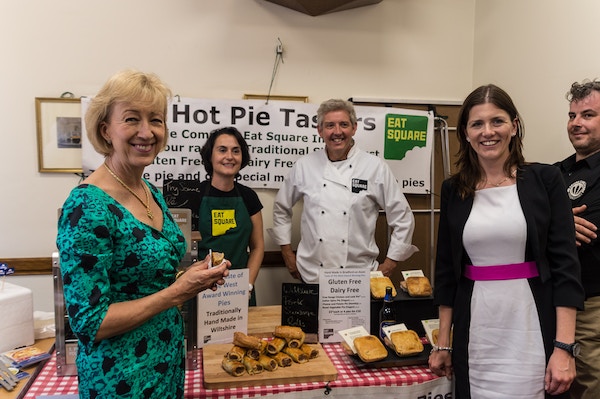 Eat Square is targeting both the wholesale and retail channels.

Eat Square has already shown that it can get listed and make sales in wholesale with major brands; currently Eat Square is listed with Co-Op, Budgens and Londis. Once we have semi-automated production and packaging we aim to send pies nationally using existing couriers in a cost effective way. Retail income currently comes from markets and events. In our view this part of the business allows for the fastest short term growth and we believe it will provide most of the initial cashflow.

Food trailers will be bought to cater events nationally, which tend to be a further outlet for sales and a great way to raise the business’ profile and public awareness. Event catering and markets are a great outlet and allow us to charge different prices than when selling wholesale. There are countless markets nationally every day, and thousands of events, so in our view this area of the business can be grown quickly and we hope it will produce strong results and profits. Eat Square need automation & space to cut production costs. We hope to lease a commercial unit.
The current kitchen premises will be kept & dedicated to gluten free pie production.
The new premises will be equipped with walk in fridges & machinery allowing faster production whilst still maintaining the hand made qualities of Eat Square.

From 15 June 2017 Eat Square will begin servicing a £20,000 unsecured loan which was entered into with mobile home entrepreneur Alfie Best. The loan is repayable via 60 monthly instalments of £379. This loan will be serviced from cash-flow and not from the use of proceeds.

The investment will be spent as follows:

Overfunding will allow greater flexibility and the purchase of ca further oven, a larger fridge and new work-top units.

More and more people care about what they eat and how it was made. Eat Square taps in to this by offering a quality free range pie that discerning pie eaters love.

Eat Square has already proven that there are discerning pie eaters out there who will pay a little more for a much better pie. We believe that Eat Square customers care about where the ingredients come from. All free range meats and eggs, locally sourced, is an essential part of our offering. In our view customers also like our home made short crust pastry rather than the fluffy tasteless supermarket pie pastry that is ubiquitous.

In 2010 the total market for pies was forecast to reach almost £1bn in the UK. The premium pies market has seen large and sustained growth in the past as people look for better quality and responsibly sourced ingredients.

We believe that part of the reason why the big pie makers are able to sell pies at lower prices is due to the volumes that they sell, however, in our view they sacrifice quality. Accordingly we believe that there is an opportunity to provide quality pies to a discerning public, and so we aim to target the growing premium wholesale and foodservice market across the UK. 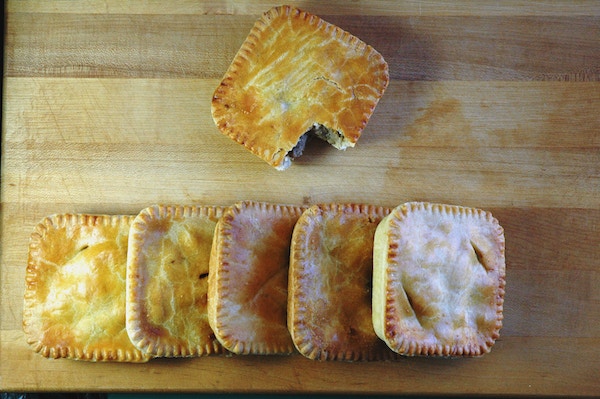 Social Media has played a large part of getting Eat Square where it is today. We engage with our customers through Facebook and have built our following to over 1000. We often run promotions and initiatives on Facebook.

PR has been leveraged considerably, with stories being published both in local press and news websites. We believe that this was a key factor in the success of our Crowdfunder initiative in 2015.

Our view is that for our products packaging is key to wholesale for retail, and in retail itself. This is an area were we have not had the resources previously. Following funding we plan to have new packaging designed to maximise the sales potential and help Eat Square pies stand out on the shelves of supermarkets.

Eat Square is already listed with 3 supermarket chains (Budgens, Londis and Co-OP) although we have been unable to service them fully. With increased production and margins Eat Square plans to capitalise on these listings and look to gain others. Despite the large number of pie makers of various sizes already active in the market, rather than opening shops Eat Square is focused on making a premium product at a great price to serve a larger market through foodservice and wholesale. The margins are smaller but the risks are lower and the market is not restricted geographically.

One of the large pie-makers, Pukka Pies turned over more than £45 million in 2015 by selling over 60 million pies. They have no retail presence yet still sell many more pies than similar brands. Eat Square plans to penetrate this market with a mid-price quality pie.

To access the Eat Square team biographies, including current ownership